X'tabay is a demonic spirit based on Mayan folklore and one main antagonists from 2009 animated movie Nikté. She was summoned thanks to the wicked monarch K'as (Tanke's parent), to entrust the mission of prevent Nikte succeed in getting a mystical flower to save the lands of Hule Town.

She is voiced by Maya Zapata.

Begins in a rite the invocation made by K'as, to call the presence of the Machiavellian spirit of X'tabay, to which he gave the order to prevent that Nikté that at that time was passed through the heavenly princess, get the divine flower. She accepts with the condition of taking Tanke. Without thinking twice, Ka's offered her own son and immediately X'tabay left in his search.

Moving forward, Chin the young chaneke meets the malicious specter promising to get the alleged "stick of tenmeaca", but it took more than a while for nikte to return and he perceived his dark way of being, trying to warn his friend to take care from X'tabay, but she sends her protective spirits to avoid meddling and guiding Nikté to the shifting sands, but chin managed to get her out.

Alone in the jungle, Nikté is betrayed by Tanke believing she was a vile liar, then left with Chanankol the loyal K'as servant. Disconsolate in the middle of a ravine, appears in a gigantic X'tabay form, promising him a better life, if she joins him, but by refusing; she will not stop to watch everything she does and thus warn K'as. She did not leave without telling him the truth of Tanke father's plans, from there she vanished in the air.

Ready to dorma the destructive beast, Ka's gets the flower thanks to his son, without knowing that X'tabay would take him, but he preferred to kill Canankol and tell him that he made a deal with Ka's. 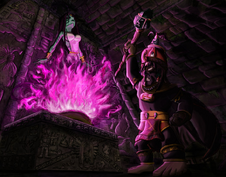 X'tabay monstrous form
Add a photo to this gallery

Retrieved from "https://villains.fandom.com/wiki/X%27tabay_(Nikt%C3%A9)?oldid=3503942"
Community content is available under CC-BY-SA unless otherwise noted.