Listening to and playing jazz music (during retirement).

Kill Samurai Jack in order to save Lulu.

X-49 is a one-shot minor antagonist in the 2001 animated series Samurai Jack, appearing in "Episode L: Tale of X-49" as the main villain protagonist.

He is an assassin droid who worked for Aku, but after seeing the amoral nature of his duty and that killing people made him do wrong (due to the installment of an experimental personality chip inside), X-49 eventually retired for a few years. However, Aku kidnapped Lulu, a stray dog X-49 adopted and demands him to kill Samurai Jack.

X-49 was created as one of Aku's early robots, the X Models, by the latter's scientists. X-49 was given an artificial emotion chip by one of the scientists that makes him feel emotions. This also made X-49 think on his own and made him live on. He managed to survive through obstacles and helped Aku conquer the world where other droids failed. X-49 later went into retirement and took in a stray dog named Lulu.

In "Episode L: Tale of X-49", X-49 was coming out of retirement by Aku who kidnapped Lulu, demanding the former to kill Samurai Jack or Lulu dies. He found Jack and followed him into an abandoned droid factory. Jack ultimately destroyed X-49 and showed sympathy to the droid. In his final words, X-49 begs the samurai to take care of Lulu.

In "Episode CI", after Jack successfully returned to the past and killed Aku, preventing his tyrannical future from ever happening, X-49 was consequently erased from existence, given that it was Aku the one who ordered his construction, and thus his encounter with Lulu never came to happen.

As an X-Model, X-49 has skeleton-like features with broad shoulders and large red eyes. He also wears the same mobster-style clothes like the others. 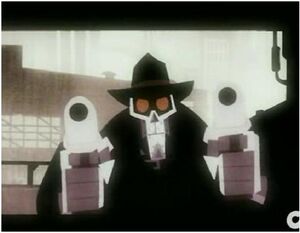 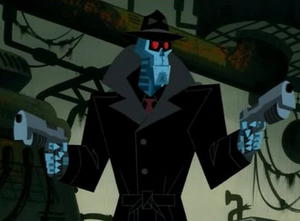 Retrieved from "https://villains.fandom.com/wiki/X-49?oldid=3948751"
Community content is available under CC-BY-SA unless otherwise noted.