XII Razor-time is a massive clock robot powered by Liquid Stasis, Nox's masterpiece and one of its most powerful weapons. Before facing Brotherhood of the Tofu, it devastates a large section of Sadida's forest with its rays of Stasi, to free the passage to the Tree of Life. Extremely powerful and destructive, and virtually immune to any attack, in the first season he succeeds in killing Tristepin with only one stroke. Damaged by Ruel's drill, it is definitely destroyed by Master Joris.

That does not seem to be enough to stop the Razor-time. Adamaï suggests to Yugo to let their friends take care of the Razor-time and attack directly at the fortress of Nox by carrying out an assault from the inside. Yugo does not like the idea of abandoning his friends, but he knows that there is no time to lose and that anyone must stop the fortress before it reaches the Tree of Life. They enter the huge machine to try to find Nox and stop him.

Tristepin ends up being wounded and is ejected by Razor-time. Evangelyne then tries to shoot one of her most powerful arrows, Amalia then wants to use the few magical resources that remain to reinforce the power of Evangelyne's arrow. When the arrow touches Razor-time in full head, the explosion is so violent that it seems evident to Evangelyne that Razor-time will not be able to recover. Unfortunately she was too optimistic, the machine is still intact and riposte immediately. Evangelyne and Amalia, who are still in shock, do not have time to dodge. A few moments after the mechanical monster is completed by Master Joris who visibly managed to join the group before the Sadida guard.

From the first episode of the second season, the Razortemps appears in a flashback with Nox, narrated by Eva when he wrote in his sketchbook, the fight that Sadlygrove had with the giant machine and lost his life in the effort to protect the Brotherhood of the Tofu. One of the children who played in the Sadida Kingdom, acted as the Razortemps.

In a promotional image, shown the remains of the destroyed robot, covered by vegetation and surrounded by wild animals. 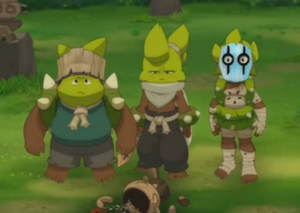 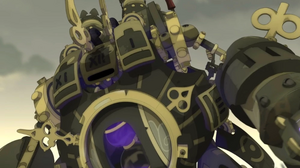