Take Clank's place and spy on the Q-Force (succeeded temporarily).

XJ-0461 2, usually referred to as Klunk, is an evil replica of Clank in the Ratchet & Clank series. He was created by Dr. Nefarious to replace Clank and spy on Ratchet and the Q-Force. He appears as an antagonist in Ratchet & Clank 3: Up Your Arsenal.

He was voiced by David Kaye, who voices his original counterpart.

He served as a minion to Dr. Nefarious and spied on the Q-Force. When Clank offers Courtney Gears a role in his holovision show Secret Agent Clank in exchange for information on Nefarious, he is kidnapped, imprisoned and replaced by Klunk. He accompanies Ratchet in Clank's place after leaving Holostar Studios, informing him about Nefarious's star cruiser named the Leviathan. Klunk fights by Ratchet's side as he explores the Obani Draco and confronts Courtney Gears in a fight. As the two explore the Zeldrin Starport, Qwark joins them as they infiltrate the Leviathan. He relayed information to Nefarious who was present on the star cruiser that they had hopped on board. As Ratchet, Qwark and Klunk reach Nefarious, he reveals that he led them into a trap, enabling the self-destruct sequence. Qwark stays on board to search the cabin, while Ratchet and Klunk flee back to the shuttle, but Qwark never returns, having apparently died in the explosion.

Back on the Starship Phoenix, the Q-Force host a funeral for Qwark, and Klunk attempts to show his disrespect. Ratchet figures out that Nefarious would target Metropolis next, and so they head there. Nefarious has Clank imprisoned there, taunting him over Ratchet being deceived by the clone. Ratchet reaches Nefarious, Lawrence, and the imprisoned Clank, and Klunk transforms into his giant self to kill Ratchet, but is defeated and Clank is rescued. 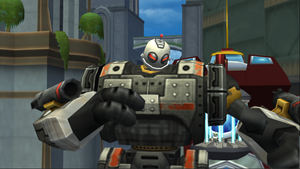