Xagor (ラグナ Raguna) was the chief antagonist of SaGa III/Final Fantasy Legend III, acting as the leader of the "Masters" and residing within a castle high atop Mt Goth he created the Water Entity, which was flooding the world and unleashing evils upon humanity - in order to stop Xagor, a group of heroes from the future were sent on a quest through time and Xagor's minions were sent to try and dispose of their threat while also continuing the grander scheme to conquer the world via mass flooding, manipulating and general depravity.

Xagor also had a massive force-field around his territory to prevent heroes from entering, this force-field was powered by a Barrier Machine guarded over by Agron: despite this shield making his territory almost invulnerable he was shown to be able to influence others via dark magic as was shown during the battle with the guardian Dahak.

Despite all his power the heroes of the story managed to fight their way to his stronghold, defeating his minions and breaking the barrier so as to storm his castle, however thanks to a confrontation with Ballor, the heroes learn that Xagor is far more powerful than they ever imagined: being an embodiment of the oceans of Pureland itself and that only a small part of Xagor resided in the castle.

Balor also informs them that Xagor is merging with Sol to become even more powerful, indeed by the time the heroes face Xagor he is being held inside Sol - who is struggling to keep the evil creature's soul from taking over. This prompts the heroes into having to kill Sol in an attempt to stop Xagor from escaping, however despite their efforts Xagor succeeds and materialises, gloating that with Sol gone he shall now rule the world.

Xagor then proceeds to fight the heroes and is a powerful opponent, so much so that the sentient Talon also joins in to aid the heroes in the final confrontation.

After Xagor's defeat he seemingly vanishes from existence: Sol also sadly perishes but informs the heroes that he will dispose of the Water Entity with his final breath, in the process, the Pureland is obliterated and Xagor is completely destroyed as a result.

In the DS version, Xagor is able to create miniature versions of himself in his first form. He merges with the Pureland Water Entity in an attempt to defeat the heroes. 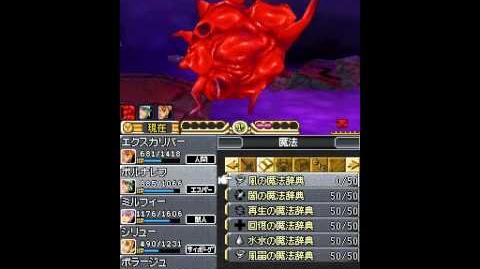 Retrieved from "https://villains.fandom.com/wiki/Xagor?oldid=3544819"
Community content is available under CC-BY-SA unless otherwise noted.