Dilan (Xaldin's human self)
Six Lances of the Whirlwind

Defeat Sora and his friends (failed).
Turn the Beast into both a Heartless and Nobody (failed).

Xaldin, also known as the Whirlwind Lancer, is the third member of Organization XIII and a major antagonist in the Kingdom Hearts series. He is a silver-tongued Nobody who controls the wind. He wields six lances named Lindworm and uses his powers over wind to manipulate all six at once, for both offensive and defensive purpose.

Xaldin's lances can transform into a dragon-shaped contraption to attack opponents with whirlwinds. He controls the lance-wielding Dragoon Nobodies.

He is the main antagonist of the Beast's Castle arcs in Kingdom Hearts II and a minor ally and playable character in 358/2 Days.

He was voiced by David Dayan Fisher in the English dubbed version who also portrayed Shaw in National Treasure, and Yōsuke Akimoto in the Japanese version.

Xaldin was once Dilan, a castle guard working under Ansem the Wise, benign lord of the Radiant Garden kingdom, who met Ventus and later took Aqua's armor and Keyblade into the castle. Becoming a Nobody to be free of feelings, Xaldin understood the setbacks of lacking a heart, but kept a clear disdain towards people who follow their hearts, especially towards the Beast.

Xaldin was present with the rest of the Organization when Xemnas inducts Xion into the Organization and when Xemnas and the others overlook Kingdom Hearts. Much later, he was present with the remaining members when some of the Organization members were defeated (being Vexen, Larxene, Lexaeus, Marluxia and Zexion) along with Xion's disappearance, Xaldin asks Xemnas where she has headed to but Xemnas responds by referring to Xion as in "It" than "she" due to her being a replica. Xaldin asks Xemnas to explain about the replica program to the rest of the members. When Xemnas orders Axel to retrieve Xion and bring her back alive, Xaldin protests this stating he would rather just eliminate her for deserting the Organization, however Saïx informs him that she isn't a deserter but that she was a flawed replica who gained an identity of her own, before he leaves he states that bringing her back alive would be "sheer madness".

Xaldin was also present when Xemnas gave Axel the order to eliminate Roxas after he defected from the Organization, Axel protests about this but Xaldin reminds him that he was ruthless to those who turn on the Organization. When Axel tries to explain otherwise, he send the order home by sending one of his lances into the backrest of Axel's chair, inches from his head. However, Axel still refuses to do so, so Xemnas threatens to eliminate him as well if he does not comply. Xaldin also appears with, Xemnas, Xigbar, Saïx, Luxord and Demyx to confront and taunt Sora, Donald and Goofy. He laughs with the rest of the Organization at Xemnas' mockery of Sora before disappearing. After this confrontation, Xaldin appears with his fellow members in the meeting room, expressing doubt that Sora is capable of wielding a Keyblade stating that he's "nothing but a boy", but Xigbar points out that unlike them Sora is pure of heart. He then breaks up an argument between Xigbar and Demyx by mocking the latter's display of emotion and asking the last time anyone of them felt anything much to Luxord's disappointment.

Xaldin secretly begins his attempt to manipulate the Beast's rage to create a powerful Nobody and Heartless. He first convinces the drained Beast that Belle is plotting against him and telling him to trust one and to feed his anger as his anger will only keep him strong. When the Beast tells him he has enough strength he mocks him by tell him no one could ever love a Beast causing him to snap at him before disappearing. Sora and his company arrive in the room but he only attacks them but Sora is able to knock him back to his senses. After Sora and the Beast defeat the Heartless in the castle he appears once more causing the Beast to charge at him but disappears once again, When he asks what he wants Sora explains his plan to turn him into a heartless. Xaldin appears with the remainder of the Organization after Demyx's defeat where Saïx reveals to them that Sora knows the truth of their plan. When Luxord explains that things are in motion, Xaldin adds that nothing is set in stone and that the dice are not in his favor he will "share Demyx's fate". Xigbar then asks Xemnas if defeating Sora will impact the Organization's plans, Xemnas explains that if Sora dies so easily he will no longer be useful to them to which Xaldin states that's what he wanted to hear, as it's not in his nature to hold back.

When Sora and company return to the Beast's castle, the Beast and Belle prepare to have their private dance but are interrupted by Xaldin who summons more heartless for the group to defeat causing the Beast's anger to rise before leaving he tells the Beast to het his anger grow. After this, Sora and Beast confront Xaldin now with the rose in his possession and taunting the former, when Sora asks what he really wants he explains when Kingdom Hearts is complete the nobodies can exist fully and completely and explains why he needs Beast as a nobody. He then kidnaps Belle, forcing the Beast to choose whether Belle or the rose is more important to him. The plan fails when Belle gets away with the rose and Xaldin falls against Sora and the Beast, fading into nothingness.

However, in Dream Drop Distance, it's revealed that he was revived as Dilan along with Even, Aeleus, Ienzo and Lea. He reappears in Kingdom Hearts III in an non speaking role where he has returned to his post as a castle guard. He and Aeleus first search for Even but do not find him, unaware he had returned into his nobody Vexen as a member of Real Organization XIII. He was shocked to see Ansem the Wise return along with the others expressing regret for betraying him until Aeleus comforts him. He is last seen escorting Namine in the end once she was restored to greet Riku. Xaldin however makes a cameo in a flashback at the time the original Organization's formation when Dark Riku explains the story behind Master Xehanort forming the Real Organization to Sora. 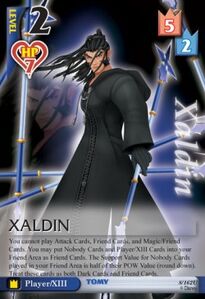 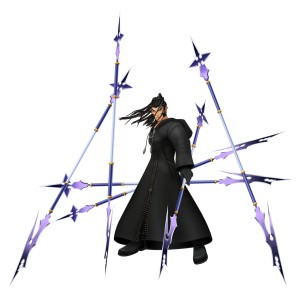 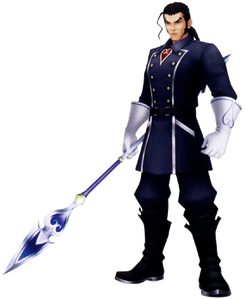 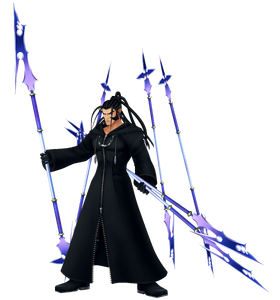 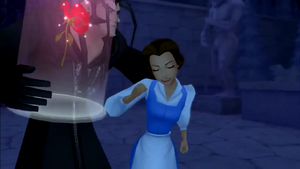