Answer the question "What doth life"

Attempt to help people
Locate his mother
Become the greatest AIDS spreader of all time
Become Normal (failed)Find his father's killer (succeeded) and slay him (failed, for it was him who killed his father)

Xavier is the main protagonist of the Adult Swim television series Xavier: Renegade Angel. Despite his goal of trying to do good to others, he has done some pretty questionable actions in the series.

Xavier is a faun-like creature with a snake for a left arm, six nipples, a beak for a nose, rearward bending legs like a bird, and an eye for his groin section. He is a self-absorbed wanderer who asks the big questions on life, such as "What doth life?" His motives tend to change in a few episodes. His number one motive was trying to aid people and improve humanity. However, he is described as being a near-sociopath who would immediately turn on anyone he's helping when they start to make him feel insecure about himself. He has also committed other morally wrong actions such as eating babies among other things. He also attempted to find his mother when he believed that she was still alive when he dug up her grave and saw meat that she was holding in the coffin. In addition, he had caused those he came across to kill themselves, which is contrary to his vows of improving humanity. 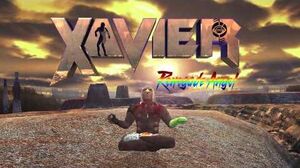