The Mole (by John Taylor)

Xavier Hirtzel is a minor antagonist in the 2015 video game Call of Duty: Black Ops III, and only appeared in the second mission, New World. He was a former Coalescence Corporation employee turned terrorist, who aided a terrorist cell in destroying a cargo train in Switzerland. In the simulation for the Player, they stop Hirtzel and thwart his plans of destroying the commuter train and its cargo.

Xavier Hirtzel was born on April 8, 2022, and was presumably born in Switzerland. Hirtzel once worked for the Coalescence Corporation, but was secretly a mole for an unnamed terrorist cell (referred to as the "Cotardists" in Nightmares) for unknown reasons. Hirtzel aided the terrorist cell in destroying one of the corporation's cargo that held a prototype for the Winslow Accord Neural Network Initiative. Despite Zurich Security Forces being notified of where the terrorist where hiding, their plans went into effect on December 12, 2054.

The train and the cargo was destroyed, killing millions of people, but the incident caused the robotics program to move forward. Hirtzel was later tipped off his allies that ZSF were going to ambush him at his hideout at the high rise apartments, but managed to stop them by using his D.N.I. to control Grunts. Hirtzel managed to escape, and it's assumed that he is still alive and still working for the terrorist cell.

In the simulation, John Taylor had the Player stop Hirtzel and prevent the destruction of the cargo train with his squad. After the Player learned of the information of Hirtzel, the Player is taken to a simulation of Hirtzel's hideout at the high rise apartments. The Player is aided by Sarah Hall in capturing Hirtzel, succeeding in capturing and killing him. Hall tells the Player to interface with Hirtzel's D.N.I. to gather intel on how he managed to get bombs onto the train. The Player does so, ultimately frying his brain, but since it was simulation of the events, his death never occurred. 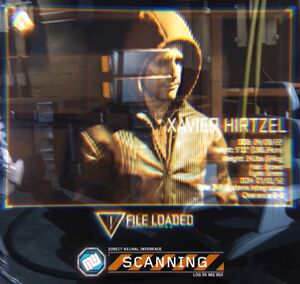