Overthrow the Childlike Empress and become the new Empress of Fantasia (failed).

She was portrayed by Clarissa Burt in the 1990 film sequel, and Victoria Sanchez in the miniseries. She was voiced by Janet-Laine Green in the animated series.

She appears later in the book after Bastian enters the world of Fantastica (Fantasia). Xayide lives in a castle shaped like a hand, called Horok, the Seeing Hand, so called because its multitude of windows appear like human eyes. Xayide's most striking physical feature are her heterochromatic red and green eyes. She has the ability to control anything empty, and thus she employs a number of guards called the "Giants" which are effectively empty suits of iron plate armour. In fact she and her emotionless guards are the force called "the Emptiness" with Xayide as the source and mistress of this evil.

While at her core, Xayide is cold and calculating, she presents to Bastian a warm and worshipping exterior, which fools him easily. Her vain wishes are to replace the Childlike Empress as ruler of Fantastica and bring sharp order to the realm of fantasy. Realizing she cannot defeat Bastian by force, she uses him in an attempt to rule by proxy, convincing him to invade the Ivory Tower with the power of his wishes to become Childlike Emperor. After losing Bastian, she is trampled underfoot and crushed to death by her iron minions who resist her waning magic. The book's chapters follow an alphabetical order pattern of the first word, thus her name serves well for the difficult "X" word in Chapter 24, where she meets her demise.

Xayide was portrayed by actress and model Clarissa Burt in The NeverEnding Story II: The Next Chapter, which is loosely based upon the second half of the novel with key differences. In the adaption, Xayide's ability to control hollow things, such as her Giants, is taken to another level: control of an entity similar to the Nothing called 'The Emptiness' which plagues Fantastica and threatens the Child-like Empress.

She is faceless in her first appearance and puts on a face by applying a magic substance. Xayide is depicted in the movie very much akin to the book's description, cunning enough to manipulate Bastian into delusion, planning to usurp the Childlike Empress and bring "order" to Fantastica. In both media, she gives Bastian the belt Ghemmal, which turns its wearer invisible and was intended for the same purpose: to spy on Atreyu.

She meets her end in the movie when Bastian uses his last wish for her to have a heart, causing her to no longer be empty and cancel herself out, and making her explode.  Before she died, she shed a tear, hinting that her new heart allowed her to feel remorse for her actions.

Xayide appears in the The Neverending Story: The Animated Adventures of Bastian Balthazar Bux and is voiced by Janet-Laine Green. She is the main antagonist of the animated series. In the animated series, Xayide physically has fair skin and pink lips as lipstick. She physically wears a green robe that is completed with a hoodie that reaches down to her waist. Her skirt and hoodie are a bright forest green while her upper dress is a spring green. Along with her robe, there are marshmallow pink trims on her shoulders and sleeves. She also has a black eyemask completed with yellow slits that covers her eyes, and a bright pink mini tiara shape. She attempts many plots to take over Fantasia and get rid of the "thorn in her side" represented by Bastian, usually by manipulating inhabitants of Fantasia or unleashing ancient magic powers, but she can also craft artifacts and cast dangerous curses as well as command her army of Giants.

In the miniseries Tales from the Neverending Story, Xayide is portrayed as the Childlike Empress' sister and is the main antagonist of the story. It is revealed that her and the Childlike Empress were co-rulers of Fantasia. However, she soon wanted power all to herself and attempted to take power away from her sister. A wizard banished her for her actions, and she soon relocated to the Dark City where she tries to take over Fantasia throughout the series. She is portrayed by Victoria Sanchez. 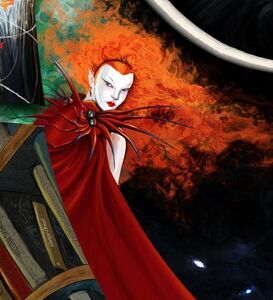 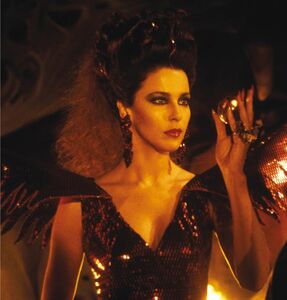 Xayide as seen in the animated series in the episode "The Tears of Sadness." 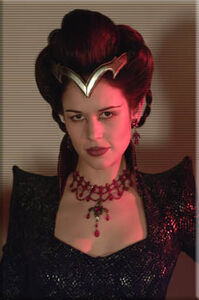 Xayide in the miniseries, portrayed by Victoria Sanchez.
Add a photo to this gallery

Retrieved from "https://villains.fandom.com/wiki/Xayide?oldid=4369697"
Community content is available under CC-BY-SA unless otherwise noted.