Killing men by crushing their chests with her thighs (usually while having sex with them).

Xenia Sergeyevna Onatopp (Russian: Ксения Сергеевна Онатопп; Georgian: ქსენია სერგეევნა ონატოპი), or better known as Xenia Onatopp, is the secondary antagonist of the 1995 James Bond film GoldenEye. She serves as Alec Trevelyan's personal henchman. Her sadistic sexual proclivities, coupled with her overall lack of conscience, would seem to qualify her as a psychopath.

She was portrayed by Famke Janssen, who also played Evelyn Stockard-Price in House on Haunted Hill, Rachel Wright in I Spy, Jean Grey in the X-Men film series, in the third film is where she would become Dark Phoenix, and Muriel in Hansel & Gretel: Witch Hunters. In GoldenEye: Rogue Agent, she was voiced by Jenya Lano. In Japanese dub of the film, she was voiced by Mami Koyama, who also voiced Esmeraude from Sailor Moon R.

Xenia Sergeyevna Onatopp was born in the former Soviet republic of Georgia. She was a fighter pilot in the Soviet Air Force. After the collapse of the USSR, she joined the crime syndicate Janus, led by renegade MI6 agent Alec Trevelyan.

Her main characteristic is that she apparently can receive sexual satisfaction through killing. In a memorable scene, she lures a Canadian admiral onto her yacht moored off Monte Carlo. While the two are having sex, she suddenly wraps her legs around him and crushes his chest between her thighs, achieving orgasm while killing him. Afterward, she steals the admiral's ID. On her way to the admiral's yacht, she raced another driver down the serpentines, unbeknownst to her this driver was no other than James Bond. However, both only raced for fun, as they were not enemies at that point.

The same night Bond encountered Onatopp again at a casino, where the two played a game of Bacara. Onatopp lost the game, which did not sit well with her. Cursing, she left the table. Bond followed her and engaged in a conversation, correctly guessing her nationality from her accent. After talking about Onatopp's car, the conversation turning to the fact that it is counterfeit, Xenia left with the mentioned admiral, leading to the fatal night on the yacht.

Meanwhile, Bond contacted the MI6 and found out that Onatopp had ties to the Janus crime syndicate. He was told to continue observing her.

Stealing the Tiger Helicopter and GoldenEye

Having grown suspicious, Bond infiltrates the admiral's yacht and finds the man's body. Meanwhile, Onatopp uses the admiral's ID to get access to the presentation of the prototype of a high-profile test flight of a Eurocopter Tiger. She secretly kills both pilots and, disguised as a pilot herself, flies off with the helicopter. Bond arrives too late to stop her.

Arriving at Siberia hours later, Ourumov and Onatopp enter a Russian base, gaining entrance through Ourumov's position. Ourumov and Xenia enter the satellite base where the corrupt general orders one of his men to give him the GoldenEye and authorization codes they need to test-fire the GoldenEye. Upon receiving these, Xenia suddenly shoots and murders all the military personnel and technicians present, again getting sexually aroused in the process- which disturbed the normally cold Ouromov. Together Ourumov and Onatopp arm the GoldenEye to fire on the base in order to eliminate the evidence. The two leave, pleased with their success, not knowing one person is still alive - Natalya Simonova. Due to the EMP attack of GoldenEye, all pursuing fighting jets are rendered immobile. However, Onatopp and Ourumov escape safely inside the Tiger.

When the MI6 finds out about the attack, Bond realizes that the Janus group is behind the attack on the base. Watching satellite footage of the scene he finds out that one person is still alive. M also finds out that Ourumov must be involved despite the Russians denying it because he does not. To find GoldenEye, Bond is sent to Russia. Together with Boris Grishenko, the traitor who revealed the location of the GoldenEye to Janus, Onatopp later kidnaps Natalya after she has revealed herself to Boris.

After Bond has made contact with Janus and asked for a meeting at the Grand Hotel Europe, Janus sends Onatopp to kill him. After Bond leaves the hotel's pool he reveals that he anticipated Onatopp's arrival and aims his gun at her. Onatopp tries to seduce Bond, but Bond shoves her off him. As he loses his gun in the process, Onatopp attacks him, climbing on top of him and trying to suffocate him with her thighs as she did with the admiral. However, Bond drops her rear end into a vat of hot water so that she releases him out of the sudden pain and he then grabs his gun, forcing her to bring him to Janus.

Onatopp drives Bond to an abandoned junkyard, claiming that Janus is waiting for him. After knocking her out, Bond exits her car and walks towards the Tiger helicopter which he spots in the distance.

Later, Bond pursues a fleeing Ourumov who has taken Natalya. Ourumov eventually arrives at Janus' converted missile train. Bond drives his tank on the rails, intending to derail the train. Alec orders a henchman to keep the train at full speed, to ram Bond's tank. However, Bond uses the tank to shoot at the train, killing the driver as well as blasting the front cabin. The driverless train crashes into the tank and derails, knocking everyone inside off their feet. Onatopp is impressed, and more than a little aroused, by Bond's heroics.

After a short moment of dizziness, Trevelyan realizes what's going on. He crouches towards his gun, but Bond steps on it, forcing him backward. In the ensuing confrontation, Bond kills Ourumov, which gives Trvelyan and Onatopp enough time to flee the train wreckage and lock all doors before escaping in a helicopter

After hacking the computer inside the train and finding the location of Trevelyan's base, Natalya and Bond manage to leave the train before it explodes. They set out to Cuba to defeat Treveyan.

While flying over a lake while searching for the base, Bond's plane is shot by a missile that comes straight out of the lake and crashes into the forest. After the crash, Alec sends Onatopp in a helicopter to search for survivors.

Bond and Simonova get shot down by plane and Xenia checks out the wreckage. Onatopp rappels from a helicopter onto Bond, who is just awakening, and quickly gains the upper hand in their battle. She gets Bond into position to crush his chest; just as Bond is ready to pass out from the pressure, Simonova attempts to attack Onatopp, only for Onatopp to easily throw her aside, telling her to wait her turn.

While she is distracted, Bond connects the rope Onatopp rappelled down to her safety harness, grabs her AK-74 rifle that was slung across her back and kills the helicopter's pilot by shooting into the helicopter's cockpit from the ground. The chopper veers away, pulling Onatopp off Bond and trapping her in a fork of a tree, with her chest being crushed by her safety harness. She struggles to breathe in her crushed state before body goes limp and she dies just before the chopper crashes. After Onatopp's death, Bond quips to Simonova that "She always did enjoy a good squeeze".

Xenia Onatopp is extremely callous, sadistic, cold-hearted, sexually sociopathic, and villainously playful. She had an amicable relationship with Alec Trevelyan (possibly a romantic one) and the rest of her Janus associates. She has a rather twisted enjoyment for killing people with her strong legs. She is shown to derive sexual pleasure from killing people. Furthermore, she is shown to be bisexual, as she heavily implied that she wanted to use her thighs to kill Natalya in the same manner that she did with men. 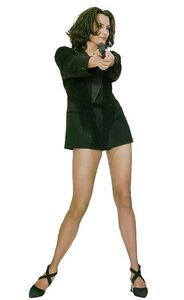 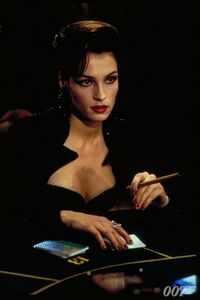 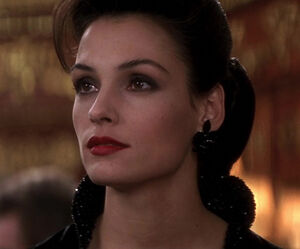