Kill any who threatens her colony and her "babies".

The Xenomorph Queen (in every Xenomorph hive) is the largest and most intelligent. She is usually the mother of every Drone and Warrior, since she is the only one to lay eggs. A Queen is also known as the Alien Queen or the Mother Alien. This giant monster serves as the main antagonist in the Alien series of films that have included Aliens (1986), Alien 3 (1992), Alien: Resurrection (1997), and Alien Vs. Predator (2004).

The Queen is much different to a regular Xenomorph. For a start, she is much larger - being almost 15 feet tall, bigger than a T-Rex. Her posture is altogether more like that of a theropod dinosaur than that of a humanoid, which the regular xenomorph's resemble. She also has a much larger brain, with a defensive crest protecting her head. The most notable feature of the Xenomorph Queen, however, is the gigantic ovipositor in the lower part of her body, which produces numerous facehugger (another Xenomorph species) eggs. She is very protective of her children and eggs and will go out of her way to help them. This mothering instinct was perfectly demonstrated in Aliens (1986), in which she chased the film's heroine, Ellen Ripley, after Ripley burned all of her eggs.

Visually, the Xenomorph Queen is more frightening than a regular Xenomorph and she has powerful back legs and long, sharply fingered arms. Her powerful and imposing head can bite through most things and her body is continuously dripping with the Xenomorph acid. Her most memorable appearance is in Aliens, in which she lays eggs in the most grotesquely compelling way imaginable.

Every Queen regulates the entire hive, and it is possible that the hive can't survive without her. they can fight outside the Xenomorph hive. They are usually nestled deep within the hive, protected by Warrior guards, like an ant queen, who never leaves the nursery chamber of an ant colony.

Queens are much larger than Drones and Warriors. They stand approximately fifteen to twenty feet tall. They have twin sets of arms, and are built more similarly to a theropod dinosaur than a humanoid. They also have a much larger brain case than the average Adult, protected by a large crest above their heads. They have a slightly stronger tail they can attack with along with their limbs or inner jaw, as shown in the climactic battle with Ripley in Aliens. Due to their immense size, they are extremely strong.

Another well-known feature is the immense ovipositor in the Queen's lower torso, which is responsible for creating eggs (similar to a queen termite). She is able to detach from the ovipositor in an emergency, and will regenerate a new one when the danger is over.

Queens have a higher ability to relate cause and effect, and to make observations and deductions, allowing them a rudimentary understanding of technology in the same way as some primates - ex. The Queen's use of an elevator on LV-426.

The Queen is also considered to be the strongest caste of Xenomorph, able to evenly fight Ripley in a Power Loader in Aliens. Queens seem more resilient to damage than the rest of the hive (even when adjusted for size), as demonstrated in Alien vs. Predator. She receives several deep throat wounds and is speared through the head, and yet remains alive.

At the end of Aliens, Ripley threatens to burn an egg when Xenomorph Drones cut off her escape route. The Queen perceives this, and beckons the Drones to move out of the way. It is possible that Xenomorph Queens value and protect their species like any good mother would. Nothing short of her own destruction will stop her from seeking vengeance upon the one who harms her offspring. In one of the comic book series (released by Dark Horse Comics), a caged Queen becomes hell-bent on killing a human soldier who kills an attacking Xenomorph Warrior.

While the Queen is the primary leader of Xenomorph Hive, it doesn't mean that they are only supreme rulers of their kind as some Queen would molt into stronger being whom regular Queen would follows. They are Empress whom handle multiple Queens whom dwelled in a hive, and Queen Mother whom manages Empresses' activities.

The Empress is a later stage in the Xenomorph life cycle not specifically stated, yet apparently hass additional function to keep multiple queens within a massive hive in line. When a hive expands to the point of having multiple queens that dwell in it, the "Empress" will rise to prevent conflict among them. Twice as large and boasts a larger crest than the rest, an Empress has an addition pair of straight spines that flank the three spires of its crest, and there appears to be not as many curves to the crest as there are with the crests of other queens; there are much more geometric lines and angles.

Queen Mothers are the supreme rulers of the Xenomorph species, and even Queens are subordinate to them. They appear in Dark Horse's extended universe, albeit only on the hive world, where they are protected by enlarged, elite drones. Queen Mother's nests consist of six orbs arranged around a central orb, in which they reside. These orbs are interconnected and contain the prized royal jelly, which molts a drone or warrior into a new Queen Mother when one becomes absent. Queen Mothers have acute telepathic and empathic abilities, thus they are able to call to their hive over vast distances.

In fact, the Queen Mother was capable of melding to the minds of humans during the Earth infestation. What makes a Queen Mother similar to a Queen is that they are both capable of laying eggs. The first Queen Mother was kidnapped by Ripley in Steve and Stephanie Perry's novel The Female War, leading to anarchy and chaos on the hive world. While a drone was morphing to take the previous Mother's place, several deviant, drones, designated as "red drones" by the humans due to their dull, burgundy color, were born that rebelled against the primary hive, and a countering red hive, led by a red Queen Mother, was created. In Aliens: Genocide, massive warfare has broken out between the two subspecies over rule of the planet as the dominant Xenomorph species.

A fleet of Colonial Marines (financed by the Grant Corporation, Weyland-Yutani's competition in the Aliens novels) were sent on a mission to retrieve the deceased Mother's royal jelly, located in the "black" hive, in order to synthesize a highly addictive drug called Xeno-Zip, also known as Fire (which the government felt was a "highly useful" combat drug). The crew decided to destroy the red Mother's hive to distract the drones of the original nest while the jelly was being extracted. The new Queen Mother was shot after killing a scientist during the extraction. 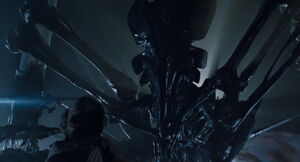 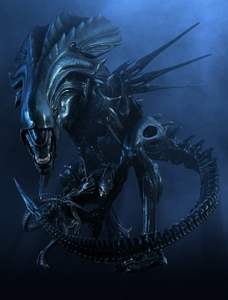 A mama and her baby 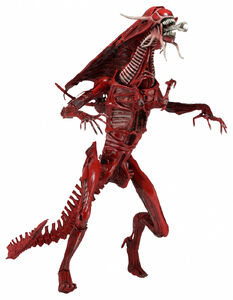 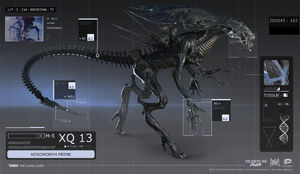 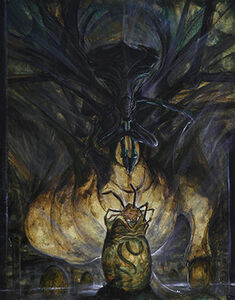 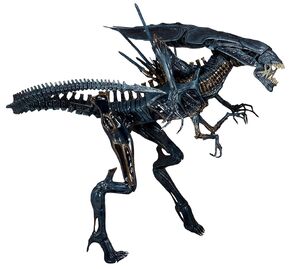 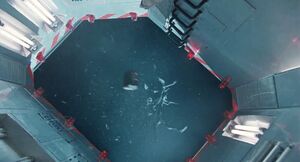 Alien Queen's death as she was sucked into space.
Add a photo to this gallery

Retrieved from "https://villains.fandom.com/wiki/Xenomorph_Queen?oldid=3406641"
Community content is available under CC-BY-SA unless otherwise noted.