Xerek was originally supposed to be the main antagonist in the movie (with Syndrome being a minor antagonist, like Bomb Voyage and the Underminer). While not much is actually known about him, some online posts have suggested that he was supposed to be Elastigirl's ex-boyfriend, who went mad when she dumped him for Mr. Incredible. His role was supposedly the same as Syndrome: lure retired Supers to Nomanisan to have them killed by the Omnidroid. However, unlike Syndrome, he would have been a "behind the desk" type villain, letting his henchmen and robots do all of the dirty work.

A bonus feature on the DVD, a clay-model of Xerek was seen, and he was shown as a strapping gentleman in his late 30's.

He was also rather tall, and wore a suit. In the comic series, he is shown as an elderly man, obviously in his 70's-80's, this is due to him suffering from a progeroid syndrome and having an unhealthy obsession with Helen however he never dated her and was simply a foe she had faced many times before.

In the comic series, Xerek had secretly been gathering a number of the Incredible's enemies to form a team called the Unforgivables. Their ultimate plan being use the villain Mezmerella's hypnosis to turn Metroville against the Incredibles. Meanwhile, Xerek kept tabs on the Parr family in order to learn their secrets.

Knowing Xerek was up to no good, Helen decided to leave town for a few days and find out what he is planning. But as Helen believed that Xerek was to dangerous for the rest of her family to face, she went alone, telling Bob and the kids that she was going to see her parents.

Bob decided to use this time to secretly train Dash, so he had Violet get a job helping out at Doc Sunbright's office so that she wouldn't tell Helen. However, as the work Violet was given could easily be done by one of the Doc’s creations, it became more obvious that the job was an excuse to get her out of the way. Violet and her dad eventually got into a little argument, which ended with Bob threatening to punish Violet if she didn't do the "job" (and him not realizing how much he had hurt her feelings).

Because of this, Violet was hurt and got her revenge by stealing technical equipment for the lab, taunting her father that the thief (her) was right in front of him the whole time. She also uses a teleporter to contact her boyfriend Xander, who Bob doesn't really like (due to the fact that he is the son of a reformed villain), and Supers around town with him instead of doing her "job".

Before the Unforgivables attack, things are tense with the family, and during the fight, their secrets are revealed by Xerek, driving the family apart as well as out of town.

Sadly, due to budget cuts, the comic series ended before the finale could be made, resulting in the villains winning (for the moment, at least) and the Parr's/Incredible's secrets from each other driving them apart. 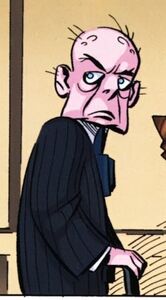 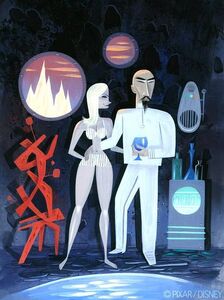 Concept art of Xerek and Mirage. 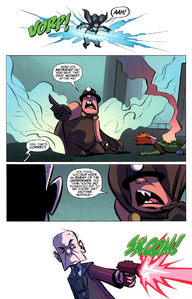