Warrior
Second-in-command of the Rourans

Xian Lang (also spelt Xianniang) is the secondary antagonist of the 2020 Disney live-action film Mulan, a remake of the 1998 animated film of the same name. Xian takes the place of Hayabusa the Falcon in the animated film.

She was a powerful witch who wanted love and acceptance from society, but the public stigma against witches led to her being an outcast once word of her witchcraft spread. Seeking vengeance against the people who mocked her, she fought alongside Bori Khan as his second-in-command in his goal to invade China, although she later aided Mulan in leading her to where Bori Khan has captured the emperor and sacrificed herself to save Mulan.

She is portrayed by Gong Li, who also portrayed Hatsumomo in Memoirs of a Geisha.

Xianniang is a powerful female witch who has the ability to shapeshift into a falcon. She can also possess people and shapeshift into those she possesses. She fights alongside Böri Khan in his goal to invade China. Like Mulan, Xianniang has a very strong chi, however hers is unbalanced giving her great powers.

Impersonating the Emperor's chancellor, she convinces China to gather troops to fight the northern invaders and lead them into traps. One such battle she took part in was in a valley against Commander Tung's unit. During the conflict, she learns that Mulan is actually a woman and comes into direct conflict with her, taunting her about her false identity.

When Mulan is forced to leave the army, Xianniang tells her of the imminent attack on the Imperial City. As Mulan leads the army to rescue the Emperor, she confronts Mulan in the throne room of the Palace. Admiring the way Mulan leads the army while staying true to herself, Xianniang sacrifices herself to protect Mulan from Böri Khan's arrow and dies in Mulan's arms. 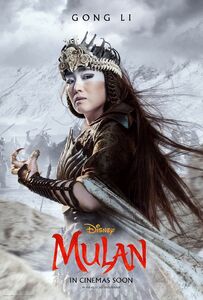 "When they find out who you are, they will show you no mercy"

"You will die pretending to be something you are not."

Xian Lang's death,
Add a photo to this gallery

Retrieved from "https://villains.fandom.com/wiki/Xian_Lang?oldid=4284962"
Community content is available under CC-BY-SA unless otherwise noted.