Enslaving Kaijus to make them do Xiliens' bidding
Brainwashing Kaijus

Hegemonic Aliens
The Xiliens are a race of cybernetic extraterrestrial humanoids bent on the conquest of Earth. They appear as the primary antagonists in the Godzilla films Invasion of Astro-Monster and Godzilla: Final Wars.

In Invasion of Astro-Monster, the Xiliens are a completely emotionless race who strictly follow orders from a computer that runs their lives. The Xiliens' leader is called the Controller, and even he is directed by the orders of his computer. The Xiliens seem to be cybernetically enhanced, as one of them is seen with several metal bolts sticking out of his body when he isn't wearing a shirt. The Xiliens seem to value conformity, as all male members of the race wear black and gray jumpsuits with large sunglasses-like visors, while all female members of their race look completely identical, because according to the Controller it is easy to "admire a beautiful face."

In Godzilla: Final Wars, the Xiliens are portrayed quite differently. First of all, the Xiliens' human-like appearance is a disguise, and the Xiliens actually resemble bizzare partially-cybernetic reptilian humanoids. While in human form, the Xiliens wear black clothing, often trenchcoats. The Xiliens' leader, again the Controller, wears a militaristic armor, while his subordinate Controller X wears a long black trenchcoat and a black visor over his eyes.

The Xiliens' homeworld of Planet X was discovered by Earth scientists, and a joint American-Japanese space expedition was sent to explore the newfound planet. There, on the seemingly uninhabitable planet, astronauts Glenn and Fuji discovered a race of technologically advanced sapient humanoids living underground. The astronauts were introduced to the Xiliens' leader, the Controller, who informed them that his kind came in peace and only wanted to ask for help from the people of Earth. The Controller informed Glenn and Fuji that Planet X was constantly under attack by a horrible space monster they called Monster Zero, who in actuality was King Ghidorah. The Controller said that if the Xiliens could "borrow" the monsters Godzilla and Rodan from Earth to fight King Ghidorah, he would provide the people of Earth with a cure for cancer. Glenn and Fuji returned to Earth to discuss the proposition with the planet's leaders.

In actuality, this was all part of an elaborate scheme by the Xiliens to conquer and colonize Earth in order to relieve their planet's severe water shortage. The Xiliens had already sent members of their race to Earth, including Glenn's lover Namikawa, to pose as Earthlings and await the Xiliens' final plan. Several Xilien ships were already waiting on Earth before the planet's leaders decided on the Controller's proposal, and eventually revealed themselves to the world. Earth's leaders agreed to help the Xiliens, and the Xiliens used their ships to transport the sleeping Godzilla and Rodan to Planet X. There, the two monsters defeated King Ghidorah and sent him retreating. The Controller thanked the people of Earth and provided Glenn and Fuji with a tape supposedly containing the cure for cancer, and sent them back home.

Back on Earth, the world was stunned to learn that the cancer cure tape actually contained orders from the Controller for Earth to surrender and become a colony of Planet X. Panic and rioting erupted over the planet, and the Xiliens soon sent vast forces to occupy Earth. The Xiliens had also been using King Ghidorah as a pawn the entire time, mind-controlling him with electromagnetic waves. Using the same method on Godzilla and Rodan, the Xiliens unleashed all three monsters on Earth under their control. Thankfully, the human race had developed a way to sever the Xiliens' mind control and had also learned that the Xiliens were weak to a certain sound frequency, which made them helpless. Utilizing these new weapons, humanity freed Godzilla and Rodan from the Xiliens' control and crippled the invaders' operations on Earth. The Xiliens' base on Earth was destroyed by tank shelling, while their ships exploded from the lethal sound frequency. The invasion was over, and now Glenn and Fuji were to be sent to Planet X as ambassadors to begin peace negotiations.

When monsters appeared all over the globe, the Xiliens suddenly descended to Earth and teleported all of the monsters away. The Xiliens' leader, the Controller, introduced his race to the people of Earth and stated that their intentions were friendly. He warned that Gorath, a planet that had fallen out of orbit, was on a collision course with Earth and would destroy it if nothing was done. The Xiliens promised to help humanity avoid this disaster, and working with the United Nations formed an organization called the Space Nations.

Members of the Earth Defense Force began to suspect that the Xiliens' intentions were not so noble, and that they were actually replacing world leaders with members of their own kind. Ozaki, a member of the EDF's elite mutant squad, freed the gruff Captain Douglas Gordon from prison and together with a team of other trusted EDF soldiers exposed the Xiliens on national television. Though the Controller was greatly concerned by this exposure, his subordinate X laughed giddily and murdered the Controller on the spot. X declared himself the new Controller, and revealed that the Xiliens needed to feed on the mitochondria of human beings as a food source, and that humans were simply "cattle" to the Xiliens. X used his Keizer powers to take control of the EDF's mutant soldiers (except for Ozaki), and ordered them to attack the remaining members of the EDF while he escaped.

X unleashed an entire army of monsters - Gigan, Zilla, Anguirus, Rodan, King Caesar, Kumonga, Kamacuras, and Ebirah - under his command to bring the Earth to its knees. The remaining members of the EDF used the warship Gotengo to free Godzilla from his prison in Antarctica and used him to battle the Xiliens' monsters. Godzilla successfully beat every monster the Xiliens threw at him, much to X's frustration. The Gotengo then assaulted the Xiliens' Mothership, even managing to breach its hull, but most of the crew was killed once Xilien soldiers boarded the ship, and the rest were taken to X. X bragged that he had won, and that Godzilla would soon die. X summoned his final monster, contained inside of Gorath, to destroy Godzilla. Godzilla blew up Gorath with his atomic breath, revealing the creature Monster X. The rebuilt Gigan soon arrived, and the two monsters double-teamed Godzilla. Thankfully, Mothra arrived to help Godzilla, and managed to destroy Gigan at the cost of her own life. Ozaki and his allies battled X and his forces on board the Mothership, and defeated them, freeing the captured world leaders in the process. Defeated, X activated a self-destruct sequence on the Mothership, intending to take down the EDF with him. Ozaki and the others escaped in the Gotengo before the ship detonated, leaving the enraged X to die.

The Xiliens in Invasion of Astro-Monster

An Xilien UFO in Invasion of Astro-Monster

The Controller with X 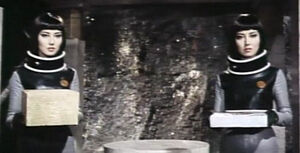