Capture Toph and the Avatar to get more money

Xin Fu is a supporting antagonist in Book 2 of Avatar: The Last Airbender. He is the head of Earth Rumber VI, and seeks to capture both Aang and Toph Beifong of a profit.

He was voiced by Marc Graue.

Xin Fu is the host of a popular Earthbending tournament known as Earth Rumble VI. As the tournament ended swiftly with the Blind Bandit (Toph Beifong) easily defeating the Boulder, he offered anyone a sack of gold to anyone who defeats the Blind Bandit. Aang accepted and accidentally won the match.

Later that night, The Boulder told Xin that he believed that Aang cheated, seeing how he didn't see any Earthbending. Enraged, Xin Fu hired everyone who attended Earth Rumble XI to find and capture both the Blind Bandit and Aang.

After they successfully capture they Toph and Aang, Xin put a ransom note at the Beifong estate. They wanted 500 gold pieces in return for Toph and Aang. Toph's parents manages to give them the 500 gold pieces, and they released Toph. However, Xin Fu found out that Aang was the Avatar, so he decided to take Aang to the Firelord, and hope to get a large sum of money. Just when Katara and Sokka are about to fight, the contestants of Earth Rumble VI appeared to defend Xin Fu. Katara manages to convince Toph to stay and fight, which she accepted. Toph managed to defeat all the earthbenders one by one, until only Xin Fu was left. Xin Fu attempted to fight Toph but he was defeated by her. Shortly after Toph ran away to join Aang and his friend, Toph's father hired both Xin Fu and Master Yu to bring Toph home, by and means necessary.

Xin Fu and Yu track Team Avatar to the Misty Palms Oasis, but discover that they have already left. While at the oasis, he notices Fire Nation wanted posters for Zuko and Iroh, and seizes the opportunity to claim that bounty as well. He follows them inside the tavern and sees them invested in a Pai Sho match, and is eager to go after them, but his partner restrains him. Xin Fu eventually loses his patience, but Iroh's Pai Sho opponent creates a diversion, leaving the patrons to distract the two earthbenders while their targets escape.

Xin Fu then tracks them to a flower shop, and Yu reveals to the door guard that he knows about his secret back room, ordering his partner to kick down the door. All they find is a vacant room with a lone white lotus Pai Sho tile, and it is revealed that Iroh and Zuko have escaped via a cart carrying potted plants.

In Ba Sing Se, Xin Fu writes a letter claiming to be from Toph's mother, saying that she wants to reconcile with her daughter. When Toph receives the letter and goes to the meeting place, she realizes too late that it is a trap, and the two earthbenders seal her inside a metal cage, apparently designed so she cannot bend her way out of it. However, they thought wrong, and Toph discovers tiny particles of earth inside the metal, successfully escaping and inventing the art of metalbending before sealing the two earthbenders inside. Xin Fu is dismayed at the thought of being stuck with Yu inside the cage.

Though Xin Fu and Yu are not seen again in the animated series, it is revealed in The Rift comics that they eventually escaped their imprisonment and subsequently gave up on their search for Toph and the Avatar. 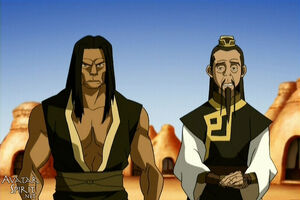 Xin Fu with Yu
Add a photo to this gallery

Retrieved from "https://villains.fandom.com/wiki/Xin_Fu?oldid=3381832"
Community content is available under CC-BY-SA unless otherwise noted.