Waging war against the Elder Things
Pathfinder:
Manipulating to cults to bring about the apocalypse
Eldritch Skies:
Feeding on sentient worlds
Cruel Empire of Tsan Chan:
Worship of the Old Ones
Meditating

Destroy the universe
Eldritch Skies:
Escape their hyperspace prison so they can feed on all sentient life
Xothic Wars:
Bring Cthulhu to Earth from another dimension

Cosmic Horrors
The Xothians (also known as the "star-spawn of Cthulhu") are a race of Eldritch beings that look like Cthulhu that serve the Great Old One, though it is unknown as to whether they are his offspring, his creations, or a race from which he came from.

The Xothians have a malleable body with some degree of shapeshifting, such as extending their arms or tentacles. The basic form though does not change which is that of a somewhat corpulent green body, clawed hands and feet, small leather wings, and a tentacled mouth. 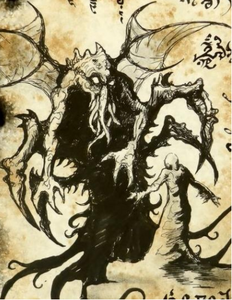 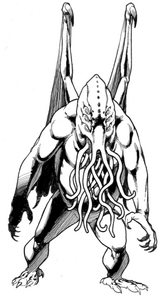 Add a photo to this gallery
Retrieved from "https://villains.fandom.com/wiki/Xothian?oldid=3991329"
Community content is available under CC-BY-SA unless otherwise noted.