Part of the Great Will of the universe

Creation and destruction of worlds

Enforcing law across the universe.

Create a perfect lawful universe for his own rule.

YHVH (pronounced Yahweh or Yehowah) is the main antagonist of Shin Megami Tensei series. The commander of the forces of the law alignment and the creator of the universe, YHVH's ultimate goal is to ensure the safety of humanity against the demons lead by his former right-hand and arch-nemesis Lucifer. However, despite wanting to seem like a just, honorable figure, he can mostly be described as an authoritarian, intolerant tyrant who wants mankind to serve him as mindless slaves and to see any opposing gods wiped out.

YHVH is shown here to have been defeated and broken into various fragments, the largest and most powerful of which is his Demiurge, sealed deep within Sector Grus of the Schwarzwelt by Alilat, one of the ancient mothers hoping to bring about their world of chaos. YHVH's most faithful servant, the Herald Metatron, disguises himself as a soldier and convinces to protagonist to go deep within Grus, claiming that treasure could be found. After Alilat is encountered and defeated, Metatron reveals his true form and motive, presenting Alilat's remains, the Nabatea Stone, as his reward.

YHVH is the true antagonist of the game. Early on, He is revealed to be the ultimate target of the Divine Powers, whose divinity He had oppressed. He is not only a force of Law, but is also playing both the forces of Law and Chaos, as revealed by Lucifer in his defeat. Following the defeat of Lucifer, Merkabah, and the Divine Powers, YHVH becomes the main antagonist for the final arc.

YHVH's throne is located in the deepest reaches of His Universe, and sends iterations of demons and angels (notably prefaced with "A".) toward the party. After the defeat of Satan near His throne, a battle is initiated with YHVH. In the battle, YHVH claims to promise salvation and goodwill to those who revere Him. However, He is denounced by the party for His cruelty and failure to bring His promises about.

After being denied His divinity, YHVH devolves into a demonic amalgamation of the deities He condemned and the destruction He plagued humanity with. Even if defeated, YHVH is still persistent in other alternate universes, and will also still persist as long as humanity believes in Him.

YHVH is mentioned in Devil Survivor as the being responsible for masterminding the Tokyo Lockdown. His followers claim that it was an act of mercy to allow humanity a chance to prove itself, as his angels had originally planned to take control of humanity by force until he vetoed them, suggesting an appropriate test to ascertain if such drastic action was necessary. Here he is portrayed as far more benevolent, as he will not oppose the protagonist unless the protagonist attempts to flee from his responsibilities as a participant in the War of Bel, or outright opposes him by becoming King of Bel to lead the demons of chaos and humanity in a war against him. 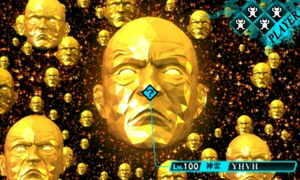