Villains Wiki
Register
Don't have an account?
Sign In
Advertisement
in: Mature, Exploitation Villains, Evil Vs. Evil,
and 27 more

Get revenge on Alan Yates and his crew for their atrocities.

The Ya̧nomamö Tribe are a remote Amazonian people who gained a fearsome reputation as cannibalistic killers, they act as the false antagonists of the controversial exploitation film, Cannibal Holocaust - despite being the titular "cannibals" of the movie, they are not seen for most of the film and arrive at the end as a kind of purifying force against Alan Yates and his crew. Despite this, they are still exceptionally dangerous and vicious opponents who exact a brutal vengeance upon Yates and his crew.

They were all portrayed by a real life tribe of natives in the Amazon rainforest.

While little is known of the Ya̧nomamö Tribe beyond the propaganda made by Alan Yates and his crew they are known to be a warrior tribe who keep largely to themselves but when provoked they would engage in vicious acts of mutilation, rape and cannibalism against their attackers - while this was done to purify their lands it attracted the attention of Yates, who wished to profit of the tribe's terrible reputation and thus he and his crew headed into the Amazon jungle to find the tribe.

Despite their reputation the Ya̧nomamö Tribe were not aggressive unless provoked, thus Yates decided to go on a bloody rampage across the jungle, murdering many locals and animals as well as burning entire villages to the ground - this was a common trait of Yates, who had staged similar atrocities for years across the globe while claiming to be an anti-war activist: he hoped that by disturbing the jungle enough he could lure out the Ya̧nomamö Tribe and induce their bloody rage, which turned out to work too well for the monstrous film maker's own survival.

For soon the Ya̧nomamö Tribe did arrive and went on a full-scale attack, gang-raping and mutilating the entire crew while also cannibalizing their corpses - the Ya̧nomamö Tribe then proceeded to take Yates' camera and store it in their village to keep it from polluting the land further, seeing it as a demonic effigy connected to Yates' atrocities.

The Ya̧nomamö Tribe would be encountered several years later by a much more peaceful expedition, the tribe allowed these explorers to enter their village and gave them Yates' camera, this shows that when given proper respect the tribe are not deadly and in the end the movie highlights that the true savages of the world were Yates and his kind, while the Ya̧nomamö Tribe are seen as a force to be either left alone or treated with great respect. 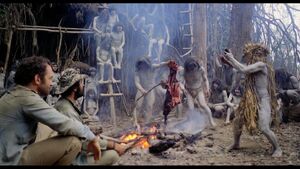 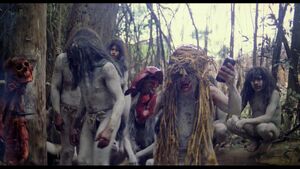 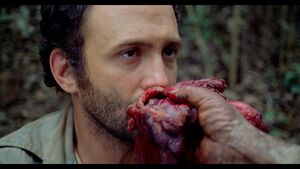 The tribe leader has Harold Monroe to gain their trust and trade a music player for the video tapes. 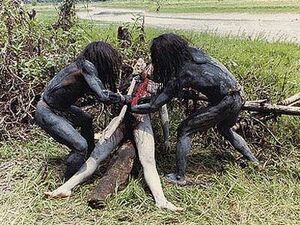 The Shamatari Tribe cutting open the body of a deceased Ya̧nomamö. 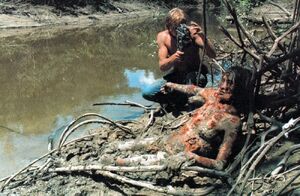 A sick and dying Ya̧nomamö man. 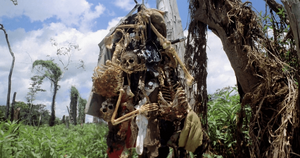 The shrine containing the body parts of Yates and his crew. 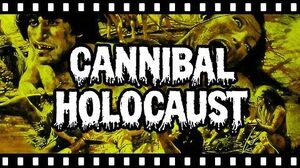