Yadogar Gohome is a hermit crab-themed Gangler Monster and is the main antagonist in episode 37 of the 2018 TV series Kaitou Sentai Lupinranger VS Keisatsu Sentai Patranger. Also he is equipped with a hand sword-like treasure called Atteindre pour toucher.

He was voiced by Kensuke Tamura.

Yadogar Gohome made his first appearance where a bunch of citizens are running away from him. However one of calling cards that were thrown by the thieves. After that both he and the Pordermen battle the Lupinranger and Patranger. However when they got him corner Yadogar used the treasure's ability to attack them in any direction, but the thieves dodge that attack, but he used his own ability as he sent the thieves and police back home.

After the intro it looks like Yadogar is very confident that he sent them all home, but Lupin Red did not leave towards home, so in retaliation he used his ability on himself in order to retreat.

A while later he'd appeared at another part of Japan, but this time he was then attack by the police. During the battle when he's about to send Patren2gou home Patren1gou takes the attack and he wasn't heading home due to the tent is his home. So in fustration he used the treasure's ability to attack them however Patren1gou used himself as shield to protect his comrades. After that Noel gained access to Yadogar's safe (which his password is 7-1-8) and got Atteindre pour toucher (which translate as "Reach to Touch") Hand Sword then Yadogar is then taken out by Patren1gou.

However thanks to Goche Ru Medou Yadogar is then enlarged now battling Good Cool Kaiser VSX after that he was then destroyed by the same bot. 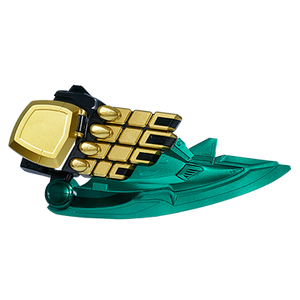 Retrieved from "https://villains.fandom.com/wiki/Yadogar_Gohome?oldid=3469415"
Community content is available under CC-BY-SA unless otherwise noted.