Use the "Three Headed Dragon of Darkness" to rule Earth in eternal darkness.

Yaiba of Darkness, nicknamed "The Paper Crane Ninja", is a major antagonist in GoGo Sentai Boukenger. He believes that darkness is the superior force in existence and uses two ninja swords that can be combined into a double bladed naginata.

He was voiced by Takaya Kuroda.

Yaiba of Darkness was a ninja mercenary that at one point of time came across a young Inou Masumi (Bouken Black) and decided to murder the excavation group that Masumi was with who were in fact abusive towards him. Since Masumi had no problem with using them as human shields to save his own skin, Yaiba became convinced he had darkness within him and therefore let him live.

When Dark Shadow became a Negative Syndicate and showed themselves to the Boukengers, he was in the shadows for their first attack. He first revealed himself to the Boukengers during the conflict to obtain two dolls that held a map to a precious. To decide whether it belongs to Dark Shadow or the Boukengers and subsequentely SGS, Masumi and Yaiba fought again while discussing their past. At the end Yaiba lost the fight and surrendered only one doll before escaping with the other one.

Yaiba soon became a reoccurring antagonist for the Boukengers and aided in many more of Dark Shadow's schemes. When fighting for the Ashu Mirror and again trying to tempt Masumi into darkness, he fought Gai and Hyouga who wanted it back. He ultimately lost the fight.

Yaiba was part of the scramble to obtain the Hyde Gene and used previous Dark Shadow Tsukogami in an attempt to succeeded at this.

Yaiba was also a part of an adventure school plan which required adventurers to obtain a sunken precious. He secretly ran the school and even threatened to harm an innocent man. The last major plot before the beginning of the end for him, was a time he was dealing a weaponized precious with an unknown dealer. He tried to fool the Boukengers by dealing with Karths in disguise and almost came close. The individual he came across was Akashi (Bouken Red) in disguise and at that time it was too late.

He was also used by the Questers to retrieve a precious for them and even though betrayed, he watched as the robo they build turned to ash with them following soon after.

At one point of time he grew tired with his master Gekkou of Illusions and thus betrayed him by releasing a precious that transformed him into a demon bird he sealed a long time ago. Since this planned was foiled he moved to his endgame plan which included tapping fully into Masumi's darkness and using it turned him against his friends. This was done with a corrupting precious that gathered a lot of darkness to summon an asteroid that would crash to Earth. Although Masumi broke free and fought Yaiba before finally landing the killing strike on him. The corruption on Masumi though lay there for some more time though and was something Masumi would never forget.

Yaiba is brought back for the Dai - Zangyack and Dai - Shocker Alliance which pits Super Sentai + Kamen Rider heroes against their enemies. Yaiba of Darkness faces his old enemies again and he is specfically seen fighting Gokai Red whom he punches and subsequently which has no effect due to Gokai Pink catching it. In additon he is seen in combat with the heroes GingaRed, GingaPink, Heart Queen, and KirinRanger

Yaiba is a cold corrupting dark ninja who enjoys to see Masumi fall to the darkness. To achieve the reward of money or whatever it may be he has no regrets in hurting anyone even his allies for it. Not to mention, how he views mass murder as merely casual and is homicidal by definition. Although he is also calm, composed, and sophisticated as he doesn't let any situation overwhelm him. He lets them play out and makes use of what he has. He doesn't have any comedic moments and is by far the most depraved of the Boukengers foes by not having even the slightest bit of love. Just of obsession over those who can possesses darkness. 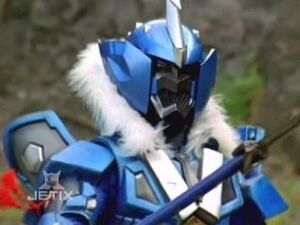 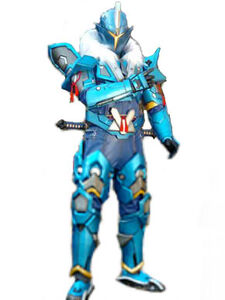