Yakon is one of Babidi's henchmen, and one of the most feared creatures in the universe. He is a gigantic, carnivorous insectoid/lizardlike/amphibian monster with long claws. He eats people and light energy and comes from the Planet of Darkness. He is a supporting antagonist in the Babidi Saga of Dragon Ball Z and a minor antagonist in the Super 17 Saga of Dragon Ball GT.

When Vegeta destroyed Pui Pui without receiving any damage from him, Babidi sent Yakon to fight them at Level 2 of his spaceship. Two of his men went to get Yakon, but Yakon ate them both. Babidi spoke to Yakon and told him to kill Goku, Vegeta, and Gohan, all of whom he wanted to eat at first sight. Goku fought Yakon. Even when Babidi took them to the Planet of Darkness, where it was too dark to see, Goku had the advantage.

He turned Super Saiyan so he could see in the dark, but Yakon ate his light energy. Goku transforms into a Super Saiyan yet again. Delighted by the fact that he has another meal, Yakon begins sucking up the light. Using Yakon's greed to his advantage, Goku counters by powering up to an enormous extent (involuntary showing Vegeta a glimpse of his Super Saiyan 2 power).

Yakon is completely oblivious to Goku's plan and continues to consume Goku's light energy so much that he begins to inflate. With Goku providing him with so much light, Yakon violently explodes.

Yakon returned in Dragon Ball GT, where he escaped from Hell with other villains. Yakon broke through a wall and attempted to attack Goten, but he was quickly killed by Trunks to rescue his best friend. Yakon then was sent back to Hell.

Yakon has wrist-level claws which he uses to slashes at his opponents. His very bones can be used as improvised blades. Additionally, Yakon has long lizard like tongue he uses for increased dexterous endeavors. His feet are built specifically for caves and gripping rough ceilings to hang entirely upside-down with ease.

Anoku-seijins have the ability to see in the dark. He has night visions and control of his skin tone, allowing him to stalk foes with ease from the dark and even go unnoticed in the light for brief periods. 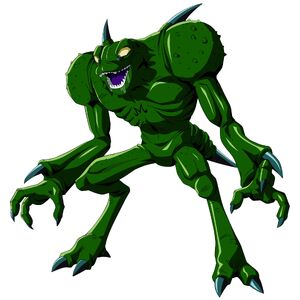