Higurashi When They Cry

After the foundation of Japan Ground Self-Defense Force

Protect Furude Rika and those working at the Irie Clinic (initially).

The Yamainu (lit. Mountain Hounds or Wild Dogs) are a counter-intelligence squad led by Tetsuro Okonogi (although able to alternately be commanded by Miyo Takano) under the employ of Tokyo. While initially there to protect Rika Furude and the Irie Clinic, they are bribed by Takano to help destroy Hinamizawa. However, they betray her in the end when her schemes fail.

The men of the Yamainu look very similar to one another. They all wear the same uniform, gray cap and black shoes. Additionally, most, if not all of them, are always armed. Their way of travel is by a gray-white van or truck. The windows of their trucks are usually shadowed, so the victim can't identify them. A female Yamainu appeared as a nurse in Yakusamashi-hen. In manga, they tend to dress in casual clothes so they don't appear too suspicious to the public.

Besides appearing in the main series, they also appear in Hajisarashi-hen. They were asked by Takano to remove Keiichi's trunks, but Oishi called the police force. The Yamainu realized that they had no weapons since they were in a swimming pool, so they had no choice but to retreat. They are often seen using a white van for transportation. Okonogi also mentions the Yamainu in Ayakashisenshi-hen, referring to them as the Wild Dog Unit. 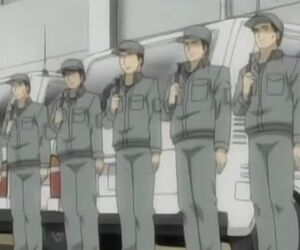 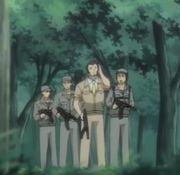 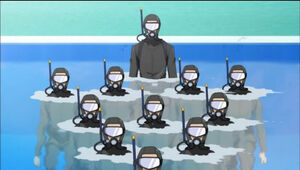 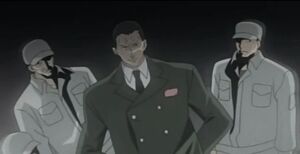 Retrieved from "https://villains.fandom.com/wiki/Yamainu?oldid=3633976"
Community content is available under CC-BY-SA unless otherwise noted.