???
Yamato Man is one of the eight Robot Masters from Mega Man 6. He is also a minor antagonist in the same game.

A combat robot modeled after a Japanese samurai warrior, Yamato Man was given a light armor which gives him great mobility, using a spear to fight. True to his motif, Yamato Man is a honorable warrior who has great respect for other combat robots like Knight Man. He joined the First Annual Robot Tournament to show his skills, but was reprogrammed by Mr. X to help him conquer the world.

Yamato Man fights by spinning his spear and firing it's head, which he has to manually retrieve shortly after. He will also jump and spin his spear, firing three spear heads downwards. His weakness is the Silver Tomahawk.

Yamato Man appears on Scorpio's ship along with Cloud Man. He also appears in a chemical plant with Dive Man and Astro Man. 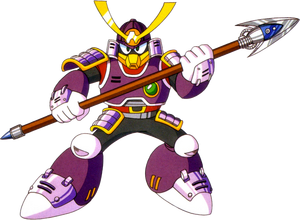 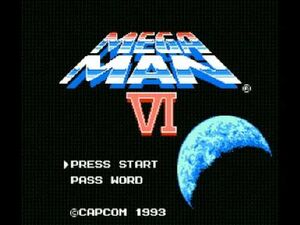