Marik Ishtar's second personality and leader of the Rare Hunters

Torturing people, dueling and sending people to the Shadow Realm.

Yami Marik's personality is the manifestation of Marik Ishtar's hatred. Cruel and insane, Yami Marik lacks any form of empathy towards others. He is sadistic– to the point that it even extends to his dueling strategy, implementing torture-themed cards that his shadow powers can manifest it into reality, in order to make his opponents suffer.

He displayed traits of masochism as well, as seen in the Japanese version of his duel against Joey Wheeler. In the duel, Marik's powers made it so every time a monsters is destroyed, the pain would transfer to their owner. When his Gil Garth was destroyed, he laughed and psychotically stated that he enjoyed the feeling.

Yami Marik places his self-preservation as a very high priority. He carries a strong hatred for Odion, whose presence was soothing for the original Marik and repressed his Yami personality. Once free, Yami Marik made several attempts to kill Odion while he was unconscious so he couldn't be sealed away again (even threatening his sister Ishizu if she didn't reveal his location). When threatened with death following his final match with Yami Yugi, Yami Marik became desperate and pled for his life– displaying none of his usual confidence.

In the Virtual World arc Yami Marik was also shown to be reckless, by destroying the a computer that was the only means of stopping a missile launch that would kill him along with everyone else in the digital fortress.

Yami Marik was awakened out of Marik's hatred and anger at the Pharaoh for having to be his tomb keeper, along with Nitemare's spirit in the Millennium Rod. He took over Marik's body and imprisoned his father in the Shadow Realm, but was contained by Odion. Yami Marik did murder his father (although this was changed so that he sent his father to the Shadow Realm in the 4Kids version). He almost did the same thing to Ishizu, but was stopped by Odion.

When Rishid was knocked out by the Winged Dragon of Ra, Yami Marik was able to reawaken within Marik, possessed his body, and trapped him inside his mind. He proceeded to Duel as Marik Ishtar in the tournament.

Yami Marik's Duels were all twisted Hell Duels. In the quarterfinals, he Dueled Mai Valentine in Hell, in which whenever a Duelist lost a monster (to an attack by their enemy), someone would be erased from their memories. Unlike Mai, Yami Marik did not mind that at all, as there was no one in his mind worth remembering. He lost the memory of Strings and Arkana during the Duel. Mai managed to steal and Summon the Winged Dragon of Ra, the most powerful of the three Egyptian God Cards, but was unable to control it, so she was defeated and trapped in Hell.

In the manga, the Duel was even more disturbing as each contestant felt the pain that was caused by their loss of monsters and direct attacks as if they were real, along with illusions of blood and decapitation, and Mai was trapped in her own mind, where she would ultimately die if Yami Marik was not defeated within 24 hours.

Later that night, Yami Bakura Dueled Yami Marik on the request of Marik's spirit who wanted to to regain his body. The two evil spirits Dueled in the Hell, in which whenever a player lost life points, their body would vanish. Yami Marik won, and Yami Bakura was trapped in Hell (though a shard of him resided in Yugi's Millennium Puzzle).

The tournament was interrupted when Noah Kaiba made the blimp land at a station where his virtual world was located in. After Noah set the virtual world to explode, Yami Marik destroyed the control center so it could not be stopped.

Battle City continued from here, and a four-way Duel between Yugi, Seto Kaiba, Joey Wheeler, and Yami Marik was held to decide who would face each other in the semifinals. Yami Marik and Joey both lost (as Joey intended), so they Dueled in the first round of the semifinals. Yami Marik took their Duel to Hell, in which players would lose life energy as their monsters were destroyed. (In the manga, the contestant once again felt the pain of their monsters, just like any time Yami Marik would launch a Hell game.) Joey held his own against Marik and resisted to the Winged Dragon of Ra's attack which should have reduced him to dust. Just as he was about to win, Joey collapsed from the energy that he lost, and Yami Marik won by default. However, Joey's soul did not go to Hell (because Joey survived and only fell into a coma).

Yami Marik Dueled Yami Yugi in the final round, in which both Marik and Yugi, their original selves, would disappear whenever they lost life points (either to be destroyed or trapped in Hell, following the manga or the anime).

Eventually, Yami Marik's Winged Dragon of Ra was destroyed, and Marik and Yami Marik were switched around, which made Yami Marik the victim. No longer evil, Marik decided to forfeit the match, so that the Pharaoh could fulfill his destiny. Yami Marik tried to convince him not to, but was unsuccessful, and as Marik lost the Duel, Yami Marik was destroyed and Mai, Bakura, and Yami Bakura were released from Hell.

An apparition of Yami Marik appeared as a lost soul alongside Bandit Keith, Arkana, the Rare Hunter, the Paradox Brothers and PaniK as Yami was trying to get to Yugi, whose soul was taken by the Orichalcos. It was unlikely that this was really him (as opposed to some sort of illusion), however, as neither the Paradox Brothers or Keith were in Hell or taken by the Orichalcos. 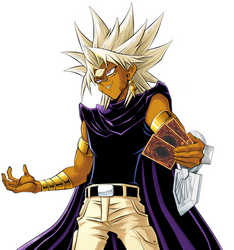 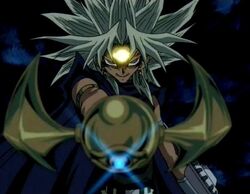 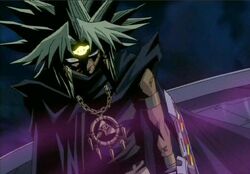 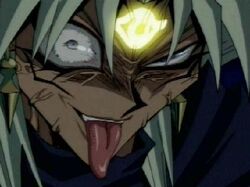 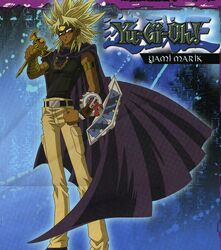 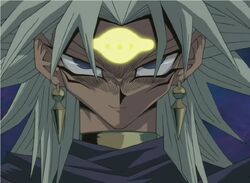 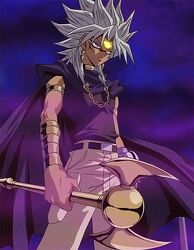 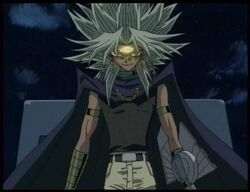 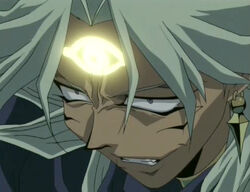 Retrieved from "https://villains.fandom.com/wiki/Yami_Marik?oldid=1700663"
Community content is available under CC-BY-SA unless otherwise noted.