Yamikage is an antagonist in the Kirby: Right Back At Ya!, appearing in the episode Ninja Binge. He is not actually a monster, nor was he created by Nightmare. He also made a cameo appearence as an action figure in the two-part episode Snack Attack.

He was voiced by Isshin Chiba in the Japanese version, and Eric Stuart in the English dubbed version.

Yamikage was once a member of the Ninja Special Forces of the Galaxy Soldier Army, but eventually betrayed them to join the dark side of the Emperor of Darkness, Nightmare. That fact is proven when he was seen riding on top of the head of a massive silver dragon, which is just one of Nightmare's kaiju-esque monsters. It is not known why Yamikage betrayed his teammates.

Years later, King Dedede purchased Yamikage to help him steal back Benikage's "failing" report card, which was believed to be a ninja scroll by everyone in Cappy Town. Benikage's curiosity almost gets him killed when he challenges Yamikage, but it is fortunate that Kirby steps in and saves the day when he got his Ninja ability, and defeats Yamikage by overpowering him. After his, Yamikage retreats, and is last seen running through the woods, promising revenge on both Kirby and Meta Knight. Strangly enough, he never comes back aftewards, so therefore he remains a mystery whether he is dead or alive. It is possible that he is never seen again.

Yamikage is very cunning, cocky, sarcastic and manipulative. He is also shown to have a strong grudge against Meta Knight and Kirby. In spite of his persistent feeling of resentment along with his traitorous actions against the Galaxy Soldier Army, he still seems to an honorable individual, saying that he does not steal from anyone, only agreeing to help King Dedede and Escargoon take back Benikage's report card that everyone mistook for a ninja scroll.

Yamikage is shaped like an upside-down egg with sunken red eyes and a scar on his left eye. He wears a black ninja suit and has a brown ponytail, and wears a kantana's shealth on his back. Yamikage also dons dark brown sandals and knuckle dusters to boot.

Being a ninja, Yamikage is a skilled ninjutsu user. He is capable of using different kinds of jutsu powers, such as as throwing shurikens and kunai. He is also shown to be an excellenct katana user. 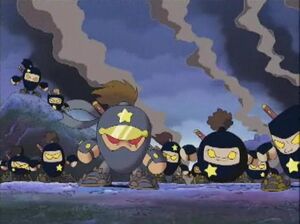 Yamikage with several other ninjas. 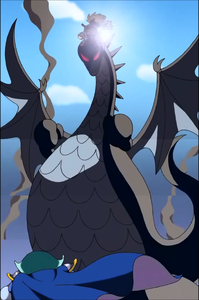 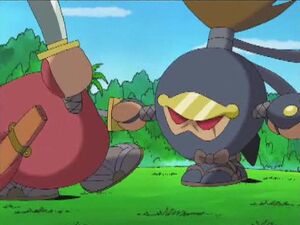 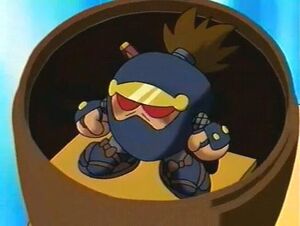 Yamikage as an action figure.
Add a photo to this gallery

Retrieved from "https://villains.fandom.com/wiki/Yamikage?oldid=3696480"
Community content is available under CC-BY-SA unless otherwise noted.