Monster
Yamogeras is a Shocker Kaijin with the characteristics of a gecko and an antagonist in episode 12 of Kamen Rider. He was originally a human named Shibata.

A remodeled human whose Shibata and gecko are synthesized by Shocker, he can climb vertical walls and stick to the ceiling, and also spouts white coagulant from his mouth to trap the object in a plaster-like shell.

He was voiced by Susumu Mizushima and portrayed by Yojiro Fujizawa in his human form.

Shibata is a collaborator of Shocker, helping Dr. Shirakawa of the Shirakawa Optical Research Institute as an assistant to complete his Danger Light and steal the data. However, Dr. Shirakawa decided to seal the research and had the microfilm containing the data hidden somewhere.

After Shibata couldn't find where the hiding place was, he was converted into Yamogeras and infiltrated the doctor's mansion. After confirming that he had given his sister Machiko a pendant with a hidden microfilm, Yamogeras abducted her and brought her to the hideout to contribute to the completion of the Danger Light.

After that, the Great Leader of Shocker ordered him to bring Dr. Shirakawa before him. At this time, he noticed Ruriko and tried to kill her before she could reveal the hideout, but she was saved by Kamen Rider 1. Despite this, Shocker was able to complete the Danger Light and have it brought out by the Shocker Combatmen. Yamogerasu also later trapped the Kamen Rider in a shell with coagulant so he could use the Danger Light on him.

However, thanks to Ruriko, Kamen Rider 1 jumped out of the fallen and cracked shell and wiped out the combatants. Yamogerasu escapes again, but is slain by Dr. Shirakawa using the Danger Light.

Yamogeras was later revived in the 13th episode as part of the Revived Kaijin Corps led by Tokageron. He was revived again in "Kamen Rider vs. Shocker". 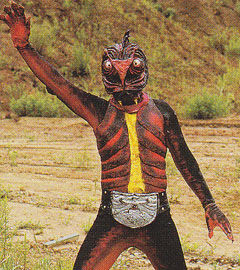 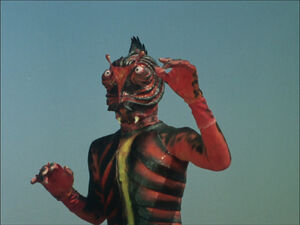 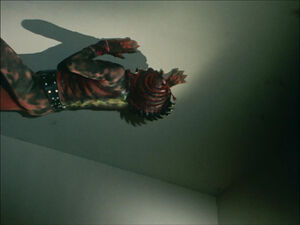 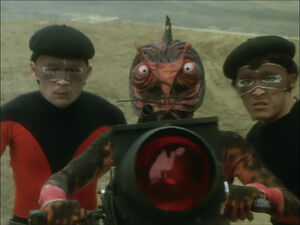 Yamogeras with the Danger Light.
Add a photo to this gallery

Retrieved from "https://villains.fandom.com/wiki/Yamogeras?oldid=4345946"
Community content is available under CC-BY-SA unless otherwise noted.