Playing with his toys.

Yan Baihu (in Japanese: 엄백호), also known as Legend Hero Wang Lang, is the antagonist of episodes 37 and 38 of the Korean Tokusatsu series Legend Heroes.

He was portrayed by Yigwangjin.

Yan Baihu was the child of two parents who neglected to spend time with him and instead just bought him toys, causing him to lash out in anger at other children. Receiving a Legend Changer and the Wang Lang Hero Piece from Zhang Jue, Yan Baihu uses his new powers to cause havoc all around town. He challenges Liu Bei, Sun Ce and Cao Cao each to fights and manages to best all three of them due to their reluctance to spend time with him.

However, after seeing what their child has become in entering the Dream Battle, Yan Baihu's parents attempt to apologize to him for neglecting him, but Yan Baihu refuses to listen to them. He then grows giant and fights Liu Bei, Sun Ce and Cao Cao in their mechas and is defeated by their combined powers.

After having his Legend Changer broken, Yan Baihu lost the Dream Battle and later went to the carnival with his parents, who had vowed to spend more time with him.

Yan Baihu is a cheerful spoiled kid and a loner who had a nasty duty of bullying other kids like Diao Chan. He easily collects toys and videogames like cars and anything. After defeating them, Yan Baihu was responsible for stealing three Legend Heroes: Guan Yu, Xiahou Dun, and Taishi Ci. However, during the final confrontation with the Legend Heroes, Yan Baihu became so scared. So that, he can be defeated by losing the Dream Battle for good. Following his defeat, he became a peaceful kid to reunite with his parents by spending more time in carnival. 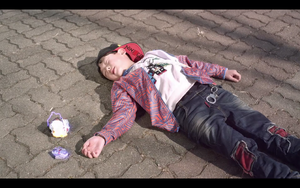 Retrieved from "https://villains.fandom.com/wiki/Yan_Baihu?oldid=3538999"
Community content is available under CC-BY-SA unless otherwise noted.