Talking to his parrot Polly

Pretending to be crazy
Sleeping

Get revenge on Miles. (failed)

Tragic Murderer
Yanni Yogi is a major antagonist in Phoenix Wright: Ace Attorney, in particular being the secondary antagonist of the fourth case, "Turnabout Goodbyes". He worked as a court baliff before becoming the prime suspect of the DL-6 incident. Fifteen years later, he murdered his lawyer from the DL-6 incident and attempted to pin the murder on Miles Edgeworth.

In the anime adaptation of Phoenix Wright: Ace Attorney, he was voiced by Takehiro Hasu in Japanese and R. Bruce Elliott in English, In the film adaptation, he was portrayed by Fumiyo Kohinata.

Not much is known about Yanni Yogi before the DL-6 case, other than the fact that he was the first to panic when trapped in the elevator during the DL-6 incident. After the case, however, his entire personality changed. Due to loss of his job, social standing and fiance, he was completely consumed by rage and his desire for revenge.

Under his fake persona, he pretends to be crazy and not remember anything from fifteen years ago. He constantly mixes up names and had the habit of falling asleep at random intervals. However, when his true identity was revealed, he was very calm and lucid. Even his posture changed from being hunched over to standing completely upright.

Yogi had clearly become a broken wreck over the fifteen years of the DL-6 incident, as the suicide of his wife and his forced isolation took a toll on him mentally. He had become mad with loneliness and vengeance, hoping for a way to get revenge at those who had ruined his life.

When Revealed, Yogi seemed almost relieved, as he no longer had to feign insanity to uphold an unfair conviction he had been handed. He calmly accepted his punishment and apologised to Edgeworth for what he had done.

Yanni Yogi was the baliff for the IS-7 case. After the case was settled, he ended up in an elevator with Gregory and Miles. Suddenly, an earthquake struck, shutting of the power and leaving the three of them stuck in an elevator for five hours. Yogi panicked and attacked Gregory during the ordeal. Miles threw a pistol, a shot was fired and all three were knocked out. When he woke up, he found out that Gregory was dead and he was accused of the murder.

He was put on trial and his lawyer, Robert Hammond convinced him to plead insanity. He won the case, but lost his job and social standing. In addition to this, his fiancée, Polly Jenkins, committed suicide. He managed to find a job running a boat rental shop, with only a pet parrot he named after his lost love to keep him company. However, he still wished for revenge against Miles and Robert.

15 years later, Yanni Yogi received a letter from Manfred Von Karma giving him instructions on how to kill Robert and frame Miles. On Christmas Eve, Yogi invited Robert and Miles to come to his shack at different times. He kills Robert on sight and when Miles arrives, he disguises himself as Robert and takes Miles on a boat. Yogi revealed his intentions for revenge before firing to shots into the air and falls into the water, leaving Miles and the pistol on board. He puts the disguise back on Robert and throws him into the lake. He calls the police and miles gets arrested.

When the case began and Phoenix Wright starts investigating the shack and finds Yogi there, who is pretending to be insane. However, his parrot says "Don't forget DL-6", revealing that there is more to Yogi than what Phoenix originally thought. During the second day of the trail, Yogi shows up as a witness and Phoenix can't pinpoint anything down. The judge declares Miles guilty, however Larry Butz burst into the courtroom to give his testimony. During the testimony, Yogi escapes from the court. Phoenix receives a code to a safe from Polly. He then goes to open the safe, but Manfred von Karma finds them and steals the evidence

During the third day, Yogi was at last apprehended. Phoenix tries to prove Yogi's identity, however, it is proven impossible. But when Manfred makes a snide remark that he should interrogate the parrot, Polly, Phoenix decides to take him up on his challenge as use Polly as evidence. When Polly revealed the combination of the safe again, Phoenix connected it to the DL-6 case. He also mentioned that Yogi named his parrot after his fiance, which he could not have done if he was insane.

Yogi decides to give up and reveals that he in Yanni Yogi. He admits to the murder of Robert Hammond and to the fact that he wanted revenge on both Miles and Robert for ruining his life. He is apprehended and is not seen again. 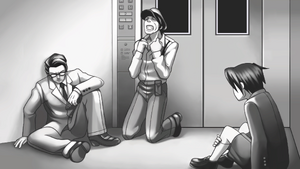 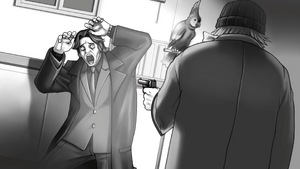