Manipulating others.
Sleeping with his shirt off.
Chatting with Yukio Mishima.
Teasing his unwilling wife.
Taking interest in politics

Yasunori Kato is the protagonist villain from the 1983 Japanese historical fantasy novel Teito Monogatari, which had several adaptations, including the films Tokyo: The Last Megalopolis, Tokyo: The Last War, and the 4-part anime OVA Doomed Megalopolis. He wears a Japanese military uniform with a cape and white gloves adorned with the Five-pointed Star (the "seiman", the symbol of the great onmyoji Seimei Abe). He is a descendant of Ainu people, the native tribes who inhabited the Japanese islands prior the coming of the Yamato Court. Kato is an incarnation of their curse against the Japanese Empire (the Yamato people) for having driven them from their land and destroyed their culture in ancient times. With his powers as an onmyoji, Kato sought to resurrect the guardian spirit of Tokyo, Taira no Masakado, which had been in slumber for a millennium. Supposedly, Masakado's awakening would turn him into a ferocious spirit of revenge and bring about the destruction of Tokyo and the entire Japanese Empire.

In Japanese, he is commonly referred to as the "Majin" (in Japanese: 魔人 Majin?, Demon Man) due to his incredible superhuman abilities and near immortality.

Katō is a supernatural Melmoth the Wanderer-style figure with a mysterious past. A descendant of the indigenous tribes who inhabited the Japanese islands prior to the coming of the Yamato people, he is described as an oni; a literal incarnation of their 2000 year curse against the Japanese Empire. As his opponent Yasumasa Hirai, the official descendant of Abe no Seimei and leader of the true onmyoji who serve the Japanese Emperor explains:

In the 19th century, he infiltrates the Imperial Japanese Army under the guise of a Japanese soldier, gains a positive reputation and rises to the rank of First Lieutenant.

In Teito Monogatari, Katō reveals his true intentions to destroy Tokyo through any means possible in order to cripple the Japanese Empire and avenge his ancestors. He joins forces with underground Chinese and Korean anti-Japanese oppression groups (such as Donghak Peasant Revolution) and continues to work behind the scenes of various periods of 20th-century history to cause supernatural disasters which will weaken Japan. His first goal is to awaken the sleeping spirit of Taira no Masakado to help him cripple the city. As seen in the Doomed Megalopolis OVA, Kato start off by torment an innocent woman - Yukari Tatsumiya - and curses her into becoming his instrument for awakening Masakado. Despite the efforts of the onmyoji Hirai, Kato takes Yukari uses her as a medium for resurrecting the slumbering spirit. Masakado briefly awakens only to refuse Kato's desire for the destruction of Tokyo. However, one of the spells Kato has cast on Yukari is the magic of En, an impregnation spell. Gazing into the future, Kato determines Yukari will become pregnant with what he believes to be his child, who will be a much more suitable medium for Masakado's spirit. After this, Kato disappears for 10 years, and when he returns he comes for Yukari's daughter Yukiko, attempting to use her as the vessel of Masakado's resurrected spirit. This attempt fails as Yukiko also proves to be an unsuitable medium (as she is really the child of an incestuous union between Yukari and her brother, Yoichiro) and Masakado violently attacks Kato for disturbing him.

Later on in the novel, Kato's birthplace is determined to be Ryūjin, Wakayama and associations are made between his lineage and the tribal offshoots of Abe no Seimei's clan. The result of this being that Kato is not only an oni, but also a powerful onmyoji who manipulates oni.

After Tokyo is rebuilt following the Great Kanto Earthquake, Kato returns again, this time attempting to awaken the Dragon of the Earth which sleeps beneath the city. Kato tries to sacrifice Yukiko to the dragon, only to be stopped by Keiko Tatsumiya, wife of Yuchiko's true father and her mother's own brother, Yoichiro Tatsumiya. Though Yukiko is rescued and Kato seemingly vanquished, he returns months later and uses all his powers to pull the moon out of orbit, threatening to destroy Tokyo by angering the Firmament Dragon. Keiko Tatsumiya again defeats Kato, but this time not through combat. Keiko reveals herself to be the Bodhisattva Guayin, a mortal representation of the Buddhist goddess of mercy, the polar opposite of the hatred and wrath that Kato represents. When Keiko confronts Kato, she does not attack him directly and merely shrugs off Kato's assaults, her body radiating spiritual energy. Realizing that he is vulnerable to the power of mercy, Kato panics and cries out defiantly as Keiko approaches him and embraces him. Kato accepts his defeat as Keiko holds him and the two kiss, their powers canceling each other out. Kato's temple suddenly explodes as his spell is undone, returning the moon to its original orbit.

Tokyo: The Last Megalopolis and Doomed Megalopolis only cover the first 1/3rd of the original novel of Teito Monogatari. In the original novel, Keiko manages to stop Kato from disturbing the orbit of the moon, however, she is taken as his prisoner in the process and forced to accompany him to Manchuria, China. In China, Kato is regaled as a hero by native guerrilla forces fighting Japanese oppression. Eventually, World War II dawns and Kato realizes that Japan is crippling itself in its continuous battle with the Allied Forces, making his involvement with Tokyo unnecessary. Thus, with Keiko as his unwilling partner, he concentrates on using his powers to free China and Korea for Japanese control.

In 1960, Kato returns to Japan amidst the chaos of student protests against the signing of the Treaty of Mutual Cooperation and Security between the United States and Japan. There he befriends the eager young writer Yukio Mishima and subtly manipulates him to promote liberal agendas in the capital which will weaken Japan's political power. Eventually, Mishima fights back, and on November 25, 1970; commits seppuku, thereby defeating Katō's influence. Katō retreats into hiding.

In 1998, Katō returns to stir up another earthquake under Tokyo by arousing the water dragon, Ryūjin. It is revealed here that Katō is actually another incarnation of the raging spirit of Taira no Masakado himself who (in the story) had cursed the city of Edo just before his death. Just as Masakado sought to overthrow the current Japanese government, so does Katō seek to overthrow the Imperial authority by eliminating the capital Tokyo. Furthermore, Masakado's curse is revealed to be not just his personal grudge, but the curse of the entire earth.

The final battle occurs amidst the wreckage of the Imperial Capital. Kato and his forces contend with the remaining guardians of Tokyo, which include a resurrected Yukio Mishima and Keiko Tatsumiya's apprentice. After a long struggle, Kato is finally defeated. Thus ends the story of Teito Monogatari.

In the side story film and novel, Teito Monogatari Gaiden, his disembodied spirit attempts to resurrect itself through the body of a mental hospital nurse in 1995.

Kato also makes an appearance as the main villain of the fantasy novel and film The Great Yokai War. In The Great Yokai War, Katō returns to Japan in 2005 with an army of monstrous Yokai (who have been transformed to serve under his command) in another attempt to destroy Tokyo. This time he is stopped by the efforts of a band of native yokai and a young boy wielding the power of the Kirindisambiguation needed] Rider. Despite being defeated, Katō survives the encounter and it is implied that at the end, he is still ready to execute another plan.

The original character was simply described as a youthful military official with a handsome visage. The character evolved in popular culture though and his image began to change. In modern depictions, he is generally described as a tall man with an unnaturally long face. His classic outfit is composed of the traditional uniform of a Japanese Imperial officer, complete with a service dress, cap, gloves, sword and a cape. On the backs of his white gloves are red inscriptions of the "Seiman" (the pentagram), the magic symbol of Abe no Seimei.

Kato is incredibly proficient in a variety of eastern magic, most notably the art of Onmyōdō, possessing abilities that rival the Tsuchimikado Clan, descendants of Abe no Seimei. He extensively employs black shikigami to do his bidding, and he can also summon goho doji. He is also known to use kodoku (worm toxins) to control and manipulate his victims.

Being an oni and a powerful mystic, Katō also has seemingly superhuman physiology and never seems to age. To fuel his magic, he requires a selective diet of human organs. To prolong his life, he performs the shijie technique from time to time. As a trained imperial officer, he is quite proficient in the use of a katana. He is also fluent in Mandarin and Korean.

Difference Between Original Portrayal and Adaptation

Kato's role and appearance somewhat slightly different between in novel and the cinematic adaptation, in which the following difference can be seen below: 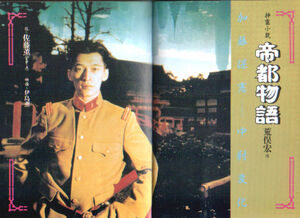 The first visual representation of Yasunori Kato from a 1984 issue of Kadokawa Shoten's science fiction magazine. Actor is Kaoru Ito. 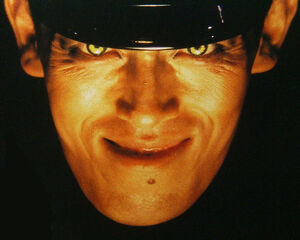 Kyusaku Shimada as Yasunori Kato from TOKYO: THE LAST MEGALOPOLIS 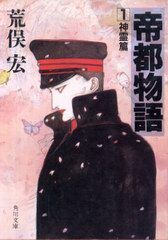 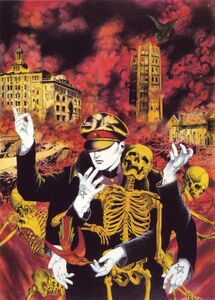 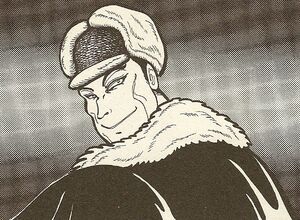 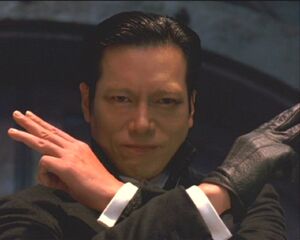 Etsushi Toyokawa as Yasunori Kato in THE GREAT YOKAI WAR 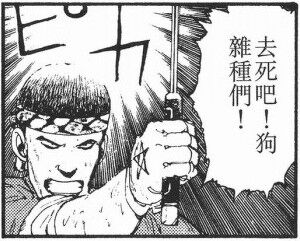 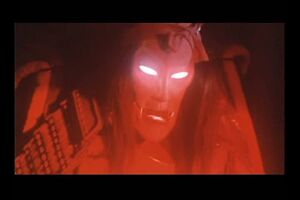 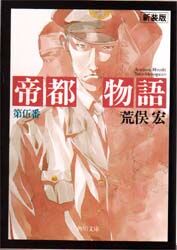 Yasunori Kato and Yukio Mishima as illustrated by Shou Tajima for cover of TEITO MONOGATARI v.5 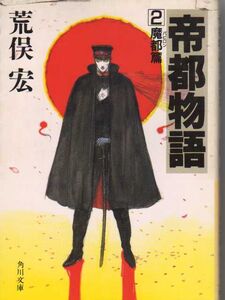 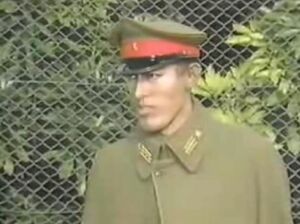 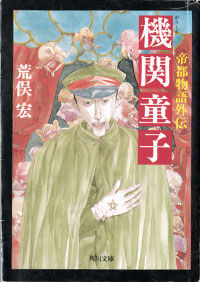 Yasunori Kato as illustrated for the cover of TEITO MONOGATARI GAIDEN 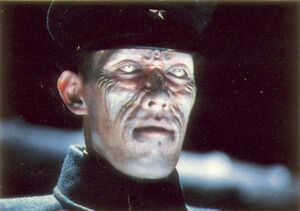 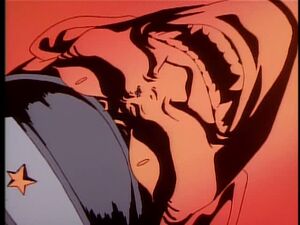 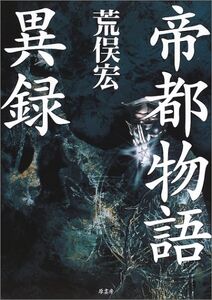 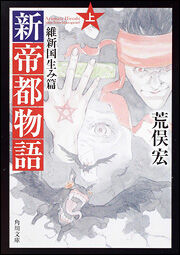 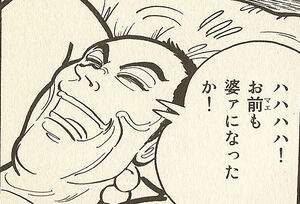 Kato getting some much needed rest and relaxation. From Yohsuke Takahashi's manga TOKIO WARS. 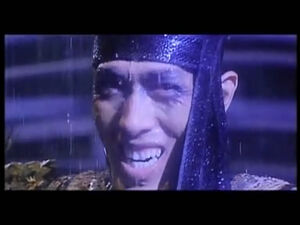 Kato's Evil Laugh as seen in Tokyo: The Last Megalopolis.