The Guy
The Metal Fetishist

Shoving metal into himself.

Destroy the world by any means.

Yatsu is the main antagonist of the Tetsuo trilogy of films. He is a tramp that had a hobby of shoving metallic objects into his body, somehow granting him an assortment of superhuman and supernatural abilities. He used these to, intentionally or not, ruin the lives of several men.

He was portrayed by Shinya Tsukamoto.

From what can be pieced together from the films unclear narrative, Yatsu lived as a homeless man in Japan, and it is implied that another man beat him with a pipe, possibly awakening his abilities and bizarre fetish. He shoved metal into his body for an unknown period of time, and eventually got hit by a car that a random salaryman was driving.

He then began using his bizarre abilities to destroy the salaryman's life from a distance by transforming him into a man-machine hybrid. Eventually, Yatsu confronted the salaryman, and they fought, which resulted in them fusing into one being who set out to turn the whole world into metal.

Yatsu was born with his brother Tomoo under unknown circumstances. Trained by their father to utilize their metal manipulating powers so they could become weapons. However, Tomoo murdered their parents in a fit of rage, which was a memory he sealed away for his entire life.

Eventually, Tomoo and Yatsu fought again after a series of events in which Tomoo learned about his past. This ended with them fusing into a tank-like beast which destroyed the city and possibly beyond. It is unknown if this was a dream or not.

After Anthony, the film's protagonist, transformed into a metal being, Yatsu tracked him down and killed a SWAT team attempting to kill him. He was also revealed as the one who killed Anthony's son via vehicular homicide. Having somehow lost his metal powers, Yatsu planned to have Anthony destroy the world in his stead.

Eventually, Yatsu was cornered by Anthony, and attempted to provoke him into killing him, as this would push him to destroy the world. Knowing this, Anthony instead consumed him within his body. Still alive, Yatsu attempted to manipulate him from the inside, but Anthony was able to suppress his consciousness.

This leads to his bizarre obsession with shoving metallic objects into himself for no apparent reason other than it seemingly brings him pleasure. In fact, he includes phallic imagery in many of things he does. However, this bizarre obsession hides his incredibly manipulative nature. He played several people like fiddles all to sate his immense lust for destruction.

Yatsu is superhumanly fast, strong, and durable as a default. He has been known to lift car parts as workout weights, move fast enough to cross long distances in a short span of time, and take lethal damage and find it nothing but a minor inconvenience.

Yatsus true powers come in his ability to manipulate metal. It goes beyond just manipulating it, as he can seemingly create it, destroy it, turn things into it, and seemingly is capable of doing anything with it. He can also create machinery on his body, from weapons, from flamethrowers to guns, to rocket jets.

Yatsu is also capable of messing with the brains of those around him, causing hallucinations, insanity, and even mind control. He can also presumably turn more people into metallic humanoid monsters like him. 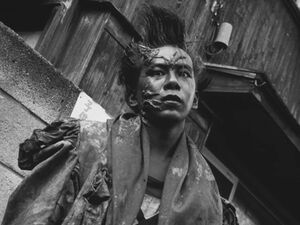 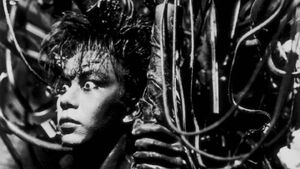 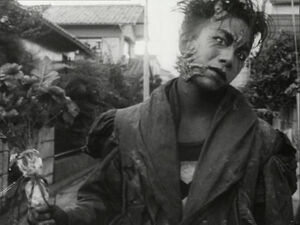