Yatsurao ("The King of Eight Faces" in Japanese) is a giant demonic statue and a minor villain in the 2002 videogame Shinobi.

A powerful Hellspawn monster, this four-armed giant that, according to Kagari Ubusuna, was brought to life by the Yin of many people killed in the earthquake of Tokyo since the times of old.

It was disabled and sealed by the Oboro Clan 72 years before the present events of the story. During the same time, they stopped the sorcerer Hiruko Ubusuna and his plans of total domination.

Hiruko after his return to the world of the living, attempts to sacrifice his living descendant Kagari Ubusuna as part of a dark ritual to reawaken him (as he also referred it as him) in order to use Yasturao as a weapon to subujugate the world once more.

Hotsuma eventually defeats Yatsurao and saved her, but its spirit along with the collective Yin of countless souls of murdered people and slain Hellspawn demons, was absorbed by Hiruko, giving him youth and even more power, which Hiruko reveals this to be his plan all along. 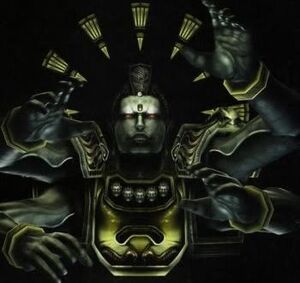 The demonic living statue known as Yatsurao.
Add a photo to this gallery

Retrieved from "https://villains.fandom.com/wiki/Yatsurao?oldid=3892806"
Community content is available under CC-BY-SA unless otherwise noted.