Get revenge on Chelle for the execution of Elua (both failed).

Vengeful Monarch
Yelda is a minor antagonist in Dragalia Lost. She is the main antagonist of Chelle's Gala adventurer story.

With the Halidom party preparing to head to the forest of faeries, Chelle figures that forming an alliance with the kingdom of Fadden would be of benefit, so she arranges a meeting with Yelda to discuss a partnership.

With this, Yelda sets the terms that Chanzelia would share their manacaster research with Fadden in exchange for the alliance. Even though Yelda expects Chelle to turn the offer down on account of having done so with other kingdoms, Chelle accepts as she says that she sees benefit in sharing research with Fadden on account of Fadden actually being involved in researching manacasters as well and even having some details that even Chanzelia doesn't have.

As the two celebrate the terms, and explosion is heard in the guest room where Yelda was staying, prompting the two princesses to evacuate to a safe place. With Chelle all alone, Yelda reveals her true intentions while pulling a manacaster out at the Alberian princess.

Chelle says that she can shapeshift, but Yelda tells her that fighting back would only initiate in war as Chelle was the only one who could shapeshift, and Chelle's death by manacaster would be seen as a traitor within Chanzelia due to the belief that Fadden never produced a usable manacaster. During this, Yelda reveals that she was to be wed to Elua before Chelle, and she blames Chelle for Elua's death.

However, Chelle manages to turn the tables by revealing she had pretended to get into an argument with Leif so that Yelda would let her guard down, and that her plan was to deal with any Kingdoms loyal to Grams. She then calls Yelda out on getting her personal vendettas in professional business matters and proceeds to offer her the original terms that were set, knowing how much Yelda complained about hating Grams.

With nothing else to do, and finding no way to please Grams, Yelda seems to have begrudgingly accepted Chelle's terms of an alliance.

Yelda is a young woman with long wavy strawberry blonde hair and blue eyes. She wears a small fancy purple hat with white feathers, a purple and white dress with a red scarf, belts, white gloves, and purple earrings.

She shares this appearance with Madame along with various generic nobles. 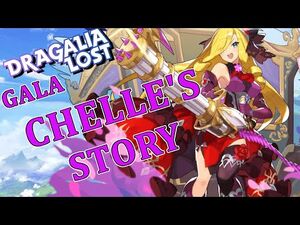