Villains Wiki
Register
Don't have an account?
Sign In
Advertisement
in: In Love, Spouses, Deities,
and 41 more

Member of the 28 Mansions

Ruler of the Bowl Mountain

Talking with his wife.

Marry with Baihuaxiu (succeeded for 13 years).

Brutal Kidnapper
The Yellow Robe Demon is an antagonist of the classic Chinese novel Journey to the West. He is actually the Wood Wolf of Legs of the 28 Mansions on Heaven.

The Wood Wolf of Legs of the 28 Mansions once fell in love with a Jade Maiden in Heaven and decided to elope with her. However, didn't want to ruin the Heaven's pureness, he told her to reincarnate as a human first, which she did as Baihuaxiu, the third princess of the Kingdom of Baoxiang. Meanwhile, he became a demon lord, based in Moon Waves Cave on Bowl Mountain, kidnapped the princess, marries her for 13 years and had two children with her.

Upon learning that Xuanzang had arrived to his mountain, knowing that eating the monk's flesh would grant him immortality or long lifespan, the Yellow Robe Demon captured Xuanzang, forced Zhu Bajie and Sha Wujing try to save their master but they are no match for the demon. Worse, the demon disguised as a handsome man and framed Xuanzang being a demonic tiger in front of the king. Zhu Bajie then went to bring back Sun Wukong – who was previously banished by Xuanzang after killing the Baigujing – to help them but they were still unable to defeat the demon lord, who had managed to escape. Wukong, knew that he is from the Heaven, then seeked help from Heaven. The Jade Emperor discovered that one of the 28 Mansions is missing, so he orders the remaining 27 to subdue the demon. Upon hearing his fellow Mansions' voices, he headed back to Heaven. As a punishment, the Wood Wolf is ordered to become a furnace keeper under Taishang Laojun until when he can finally make up for his crimes, or otherwise he might get an even worse punishment.

Much later, Sun Wukong was forced to fight the Kings of Cold, Heat and Dust Protection (the three demonic rhinos), and seeked help from Heaven again. They sent four deities to subdue the three demon kings. Wood Wolf was included in the deities. Eventually, they managed to capture and defeat the three rhinos, and then bid a farewell to Wukong before returning to Heaven. Though it wasn't stated, this is most likely meant to be Wood Wolf's redemption to make up for his crimes. 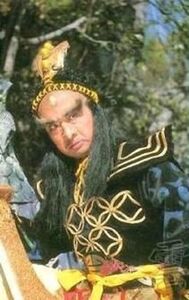 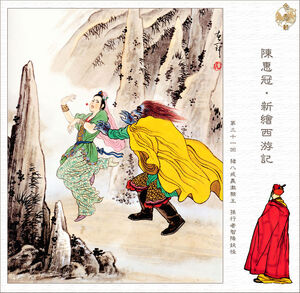 The Yellow Robe Demon in the novel.