Yellow Toothed Elephant Demon (in Chinese: 黃牙老象) is one of the antagonists of the classic Chinese novel Journey to the West. He is actually the white elephant that the bodhisattva Samantabhadra rides on, but then became a demon king in the Lion Camel Ridge, alongside the Azure Lion Demon and the Golden Winged Great Peng. He appears as a giant with an elephant-like face.

In the 1986 classic adaptation series, he was portrayed by Wang Weiguo.

The Yellow Toothed Elephant is originally the white elephant of the bodhisattva Samantabhadra. At one point, he somehow escaped to the mortal realm and became a demon in the Lion Camel Ridge, ruled it alongside the Azure Lion Demon and the Golden Winged Great Peng. Any human who was passing by the mountain would be captured and eaten by them.

Upon learning of Xuanzang's arrival, the three demon kings planned to capture him, as eating Xuanzang would grant one immortality. However, Sun Wukong killed one of their messengers and disguised as him, only for the Golden Winged Great Peng to blow his cover. Fortunately, Wukong escaped imprisonment and, along with Zhu Bajie, went to fight the demons, only for Wukong to be consumed by the Azure Lion, though Wukong managed to escape and force the demon kings to bring them pass by the mountain.

The Elephant, however, still not accepted this, went out to defeat Wukong. While fighting with Zhu Bajie, he uses his nose to wrap around him and capture him. Wukong released Zhu Bajie and defeat the Elephant, forced him to bring Xuanzang's group pass by the mountain as well, which he forcibly accepted. Unfortunately, the Golden Winged Great Peng, the most intelligent of the three demon kings, set up a plan to capture Xuanzang's party, which he succeeded. Despite numberous attempt to rescue the group, Wukong failed and eventually resorted to the help from the deities. Ultimately, the Yellow Toothed Elephant is eventually subdued and taken back by Samantabhadra, and the Azure Lion and Peng were defeated as well. 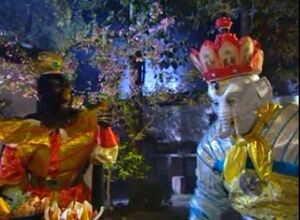 The Elephant and Peng, celebrating over their victory.
Add a photo to this gallery

Retrieved from "https://villains.fandom.com/wiki/Yellow_Toothed_Elephant_Demon?oldid=3538950"
Community content is available under CC-BY-SA unless otherwise noted.