NOTE: This article is about the incarnation of Darren Cross from the Marvel Cinematic film series. The mainstream version can be found here: Darren Cross.

Owner and CEO of Cross Technologies
Inventor of the Yellowjacket technology

Force Hank Pym out of Pym Technologies and later revamp it as Cross Technologies (succeeded).
Kill Hank Pym and Scott Lang (failed).
Sell the Yellowjacket technology to HYDRA and revolutionize the future of warfare and espionage (failed; although HYDRA does obtain the particle).
Kill Scott's daughter Cassie as a part of his revenge to take something away from him for destroying his company and everything he built (failed).

He used to be Hank Pym's former assistant until he forced him out of his own company and took Pym's place as CEO. Since then, he has been planning to revolutionize the future of warfare and espionage with an advanced weaponized version of the Ant-Man Suit: codenamed the Yellowjacket. He is also Scott Lang and Hank Pym's arch-nemesis.

He was portrayed by Corey Stoll, who also played Uncle Junior in The Many Saints of Newark.

Darren Cross graduated from MIT as valedictorian at the age of twenty. He was hired directly from MIT by Hank Pym, and for a time worked as his assistant. However, he wanted to learn the secrets of Pym's Ant-Man Suit and his size-reducing Pym Particle technology, only for Hank to repeatedly shrug off his curiosity and insist that no such thing existed. Cross became obsessed with proving the Pym Particle existed and at some point, he forced Pym from his company, Pym Technologies, and took over as CEO, renaming it Cross Technologies. Ever since he put all of his efforts towards re-discovering the Pym Particle.

In the film, Darren shows Hank his new project: a weaponized version of the Ant-Man Suit, codenamed the Yellowjacket. Which he wants to spread around the world to revolutionize the future of warfare by selling the suit to the highest bidder. However, he has yet to replicate the Ant-Man's Pym Particle technology into the prototype so that it's safe for human use, as it degenerates the cellular structure of living organisms, turning them into a pile of lifeless genetic material. Hank, horrified at the danger the new suit poses, chooses prisoner Scott Lang to become the new Ant-Man and steal the Yellowjacket from Cross before it is perfected and unveiled to the world.

Eventually, Cross finally duplicates the Pym Particle technology into the Yellowjacket, albeit an imperfect version that drives the user insane when worn for too long. However, Cross does not realize this, thinking he perfected the suit, and visits Pym at his house to gloat and kill him. However, he is unable to do so when he realizes his assistant, Pym's daughter Hope van Dyne, is also present. Realizing his former mentor might intend to use his own Ant-Man Suit to stop him, he instead invites Pym to the unveiling ceremony to prevent him from doing so, while also increasing security.

When Ant-Man breaks into Cross Technologies and attempts to steal the suit, he is instead captured by Cross, who reveals he knew about their plan and intends to sell both the Yellowjacket and Ant-Man suits to HYDRA, represented by former S.H.I.E.L.D. agent Mitchell Carson, while maintaining the monopoly on the particle used to fuel the suit. He then shoots Hank in the chest but Hank survives. When Ant-Man breaks out of the trap, Cross attempts to escape in a helicopter with the Yellowjacket; but Ant-Man follows him as Cross Technologies and its research is destroyed by bombs planted by Ant-Man earlier.

With no alternative, Cross dons the Yellowjacket suit and fights Ant-Man inside the helicopter, eventually dueling in a briefcase which falls out of the helicopter, landing in a pool. Rising from the water, Yellowjacket is about to attack the owners of the house, but is incapacitated by Ant-Man, who swats him into a bug zapper. However, Ant-Man is arrested before he can destroy the Yellowjacket suit. Enraged at Scott for losing his company and driven insane by the imperfect shrinking formula, Cross arrives at Scott's home and attempts to kill his daughter Cassie, but is stopped by Ant-Man and Paxton.

After a fierce fight with Ant-Man, Yellowjacket prepares to kill both Paxton and Cassie, but Ant-Man defeats him by shrinking to subatomic size and sabotaging the wiring in the Yellowjacket suit, causing Yellowjacket to shrink uncontrollably until he is ripped apart. It's unknown what really happened with him, but there are two possibilities. One, he probably died when his suit was destroyed. Two, it is implied by the director of the movie that he's still alive somewhere in the Quantum Realm, continuing to shrink for all eternity.

Darren Cross is an extremely cruel, ruthless and uncharitable businessman who is willing to use Hank Pym's Pym Particles as a weapon. He believes that his ends justified the means and would easily attempt to use anything in order to gain his final goal of miniaturizing organic matter, including using lambs to shrink even if the end result was a failure and once this was accomplished Cross had no qualms about flicking the successfully shrunk lamb in its container as a mere plaything. He was a good person when he started working for Pym as his protégé, but that changed when Cross became obsessed with the Pym Particles and the Ant-Man Suit. As Pym pointed out, Cross was basically what Pym used to be like in his youth and originally thought he was the son he never had.

Cross had no problems with murder, as he killed Frank for questioning the Yellowjacket Suit's safety using a Shrink Gun, attempted to kill Pym out of jealousy and anger, and Cassie Lang and Jim Paxton when they got in the way. He was also willing to sell the Pym Particles and Yellowjacket Suit to shady businessmen - like HYDRA. As an extremely cautious and intellectual man, he was able to deduce and plan ahead of his enemies, like when he set a trap for Scott Lang, Pym and Hope van Dyne after the latter attempted to steal his suit. As Yellowjacket, he became crazy after losing Pym Technologies and being electrified by a fly-light trap. He attempted to kill Ant-Man with no restraint, as he unintentionally killed his bodyguards and the pilots during the helicopter fight with no regard for his own action, and was willing to use Cassie Lang as a hostage to get to her father.

Overall, Cross is a sadistic and unpleasant man who commits all of his crimes for the sake of his ego. He would have done anything if it meant getting famous off Hank's ideas. 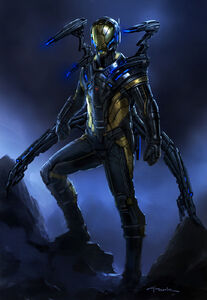 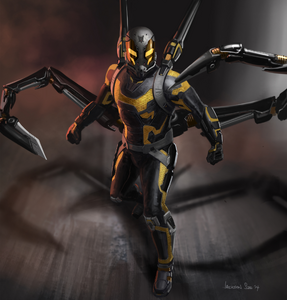 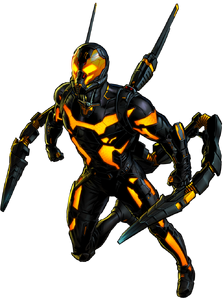 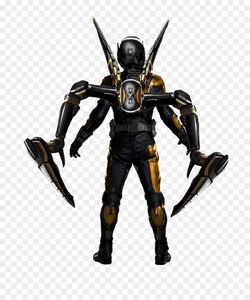 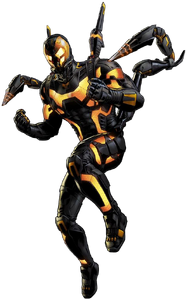 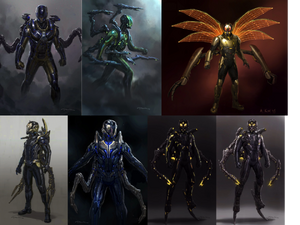 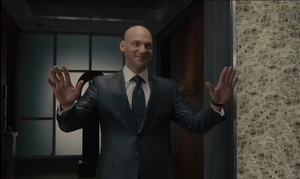 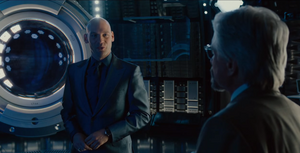 Cross reveals his superiority to Pym. 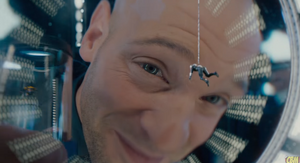 Cross imprisons Ant-Man during the heist on Cross Technologies. 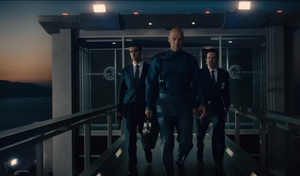 Cross tries to leave by helicopter. 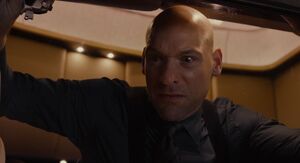 Darren's breakdown after he watched his life's work all destroyed.

Cross dons the Yellowjacket suit for the first time.

Yellowjacket emerges from the pool.

Yellowjacket threatening to kill the civilians. 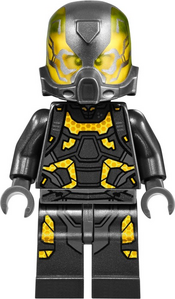 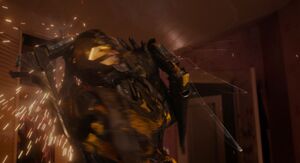 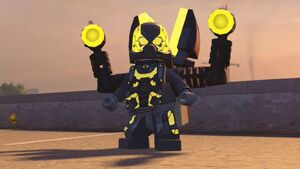 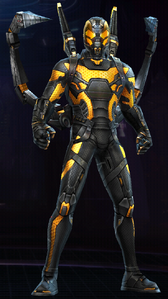