Keep himself in the power of Joseon Dynasty.

Eliminate all seonbi scholar elite of the nation.
Enjoy sexual pleasure until the day he dies.

Yi Yung, also known as Lee Yoon and later known as Yeonsangun of Joseon, Prince Yeonsan and Yeonsan-gun is the main antagonist of the 2015 South Korean period drama film The Treacherous. He was the 10th king of Korea's Joseon Dynasty born in 1494 and ruled Joseon Dynasty at young age.

Yeonsangun ruled his dysnasty with iron fist and is often considered the worst and most evil ruler of the all of Korean history, being well-known for ordering two purges of the seonbi scholar elite for questioning his reign. Among all tyrants of Korea history, Yeonsangun was the worst known sexual predator of his time and was known as a lustful beast who kidnapped thousand women from his dysnaty to serve as him as sexual slaves and palace entertainers. Due this cruelty and repulsive nature, the Dysnaty erased his name from the names of temples in an attempt to erase him from history.

He was portrayed by Kim Kang-woo.

The film starts with the king's loyal retainers, Im Sung-jae and Im Sa-hong giving him a piece of old cloth that belonged to his mother, confirming that she was killed in a conspiracy against his father to overthrow his mother from her throne for being a false queen considering her status as concubine. Taken by hatred, the king personally goes after all the concubines whom hated his father and beat them to death. When he was done with them, he mutilated their corpses and ordered his soldiers to spread their limbs around this dynasty to curse them after their deaths. He also brutally killed his grandmother. When he was informed the academics and messengers spread to the news of his mother's death, Yeon ordered they were arrested, tortured them in heat chairs, and forced the young students to drink honey to be devoured alive by insects or be simply decapitated. Desiring more, the king ordered his soldiers to find the graves of the late traitors and defiled their mortal remains. At the final of the purge, he captured 200 academics and cut them to pieces while they were alive and feed pigs with their rests so they can suffer eternally on the mortal world and had their heads hanged in every gate of the dynasty to give a warning to all his opposers. When the purge came to an end, the king returned to his "matters" and left the country to die in poverty and hunger as he had a fascination for sexual contacts, so much he had his concubines having sex for hours only to create the "perfect piece of art". If they If they got tired too fast before he could finish his drawing, he would have them flogged.

When he was tired of his concubines he personally went to "hunting" with his guards around the dynasty, invaded villages, used villagers sparring targets to test his bow and arrow skills and takes at least two women he finds attractive for him to rape them in front of their families and lovers.

Because of his tyranny, he perfectly knew he couldn't trust in anyone and so bet a race with one of his minions to test his loyalty but when he saw visions of assassins trying to kill him he fell from his horse and cut off the head of his horse before ordering his ministers to kill every single stork of his dynasty for simply scaring him.

Injured from his fall, Im Sung-jae suggest the king to use his carnal desires to heal him from his injuries and promises to give him the best feeling of the world. Following his advice, the king created a group called Beauty Attorneys to capture all most beautiful women of the dynasty, independent of their classes or position, including kidnapping the daughters and wives of honorable lords. With no women safe from his grasp, all women from dynasty were hidden from his soldiers. Knowing the state of his people, Yeon had his men bribing poor families with crumbs and old accessories to give the hidden women to his forces. If they refused to give them their women he would have his men mutilate their families.

In his palace, when hundreds of women were finally brought to his territory, he threatened them saying if they missed their families or loved ones he would personally cut their heads off. To satisfy his desires, he abolished the study section of the palace and turned it in a pleasure section where he would conduct orgies. To help the professor obey his orders and break the royal codes he brough his wife only to show the current situation of his wife's body, revealing he had been constantly abusing and raping her only to keep the baby of the couple alive. His Beauty Attorneys then trained his concubines to be ready to satisfy the king but if he entered in the climax too fast he would beat them up because it was not satisfactory enough.

One night, when he was watching his concubines dancing in a festival, an assassination attempt happened but the assassin failed in his mission. Discovering the assassin was a member of one of his concubines' families, he ordered his men to go after all their families, killed their babies and children and arrested their parents and lovers. In his palace, he forced his concubines to "help" him use "traitors" as sparring targets. However, it was later revealed the sparring targets were actually their lovers and families. During his execution, a very peculiar execution called the attention of most of Yeon's ministers. When the king showed the face of one of his concubines' lovers, he sadistically forced her to grab the bow to assist him in his shot, but the young concubine said she had nothing to do with that man, and to prove that by "pleasing" him in front of the public and her lover in exchange of not killing him. The woman did as he requested but the king shot down her husband anyway stating if he wasn't her husband then he is nobody and deserved death. Angered by his death, the concubine grabs the king's sword and prepared to kill the king, much to his happiness and begged for her to kill him but instead she committed suicide causing Yeon to cry like a child as there was no fun anymore. Extremely disappointed, the king revealed the parents of all his concubines and had his men killing all of them at once.

With only two concubines left to become his true bride and give birth to his heir, Yeon had the two concubines having sex with promise the winner would have the loser's head; the one who climaxed first loses. When he decided the winner, he prepared to cut the head of the loser but changed his mind and kept Seol as the winner's sexual slave, promising to impregnate the winner tomorrow. When Seol was in his bed to have comfort him, she tried to kill the king but failed. To punish her, he search for her past and discovered she was the daughter of one of the lords he killed in the first purge. He then arrested all people related to her, brought them to his palace and had them beheaded right in front of her. To push her to despair even more, he brings the mortal remains of her late father and destroy them with a hammer. Seol then finally says everything he deserved to hear and stated he was not a king but a murderer who destroyed his own dynasty to satisfy his carnal desires. In a fit of rage, he smashed her head.

Later it was revealed those words shocked him to the point he questioned if he was good king. Much later, he had a meeting with two of his most trusted minister and states that woman was right about his perfomance as the king. When the ministers said they did everything he ordered them because they cared for his well-being, Yeon could relieve himself from the guilty of destroying his own nation and blamed his ministers for his misrule, calling them traitors and blaming them for the murder of all his concubines' families and for the death of thousands more. To punish them, he forced Im-Sa-hong to drink ink from his feet only test if he was a "loyal minister" or a "dog". Much later, he once again ordered his minister to start another "beauty hunt" to find a wife worth of giving birth to his heir.

Free from his guilt, he lost his sanity and the few social chains that kept him in line and ordered the death of all families of the captured women and used their naked bodies as "human-brushes" to draw erotic art. Displaying such brutality, a rebellion started to overthrow the mad king. In his palace, he was taken by Sung to an old warehouse to show him his new concubines but instead met his greatest humiliation. Sung locked the king a room and gave him a bath with the blood of all the people he killed, only later to show his new "concubines" that were actually the pigs he used to feed with the limbs of his victims.

When the rebellion was over, the rebel leaders and his former ministers found him in the locked room and were shocked to see the king had killed all the pigs while laughing insanely, stating that he was no longer a king but a crazy beast.

After he was demoted from his position, the king was sent into exile on Ganghwado, where he died the same year after only a few weeks. Yeonsangun's young sons were also killed to erase every memory related to him from his history for being remembered as the single most evil tyrant of Joseon dynasty. 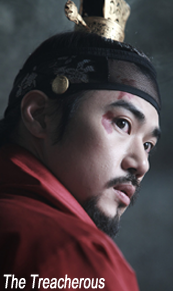 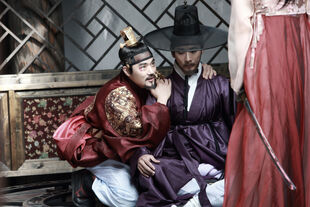 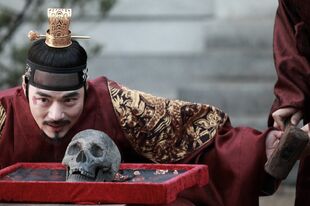 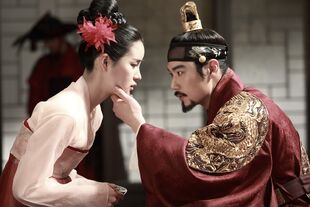 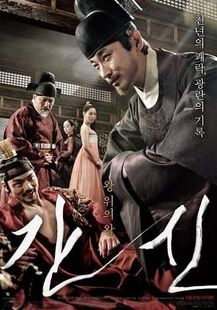 Retrieved from "https://villains.fandom.com/wiki/Yeonsangun_of_Joseon_(The_Treacherous)?oldid=3785789"
Community content is available under CC-BY-SA unless otherwise noted.