Abominable Snowman
The Creature
The Monster
The Beast
Harold the Yeti

Drive humans from its mountain.

Murderous Monster
The Yeti is the main antagonist of the Disneyland attraction Matterhorn Bobsleds. It is a vicious monster that lives on the Matterhorn, attacking humans that dare to enter onto the mountain.

Its vocal sound effects were provided by Frank Welker.

Guests get onto the bobsleds and head up one of the two sides of the mountain. As they climb up, they can hear growling and see red eyes peering at them through sheets of thin ice. Soon they hear the ice shatter, and the intimidating monster's glowing red eyes can be seen as it roars at them from the darkness.

The bobsleds immediately speed away, only to see the remains of a wrecked camping site where the people have died and smashed bobsleds. As guests weave through the narrow corridors and open caves, they will come across the yeti behind rocks and ice, lunging and roaring at them, trying to bite or grab them.

The bobsleds make their way through the winding tunnels, with the howling of the wind and the roaring of the yeti echoing everywhere. The yeti stands on a rock ledge as guests travel under, and later appears again in a dark and cavernous cave, lunging at guests. However, they eventually escape and safely get back to the base, so that the yeti will not attack them.

From July 17, 1955, to 2015, the park used the same yeti animatronics to represent the same yeti throughout the ride. These models were done up with narrow red eyes, long arms, and scary expressions. But on May 22, 2015, the ride was refurbished, and the yeti animatronic was updated to include rounder eyes, lighter skin, and less frightening faces. The 2015 renovation also included the addition of more red eyes and the sheets of ice.

In this video game, many yetis appear as the enemies in the Matterhorn Bobsleds minigame. This is strange since there is only one in the attraction's story.

The yeti appears as a piece in Disney Emoji Blitz.

A yeti is seen chasing Heinz Doofenshmirtz in the episode "Christmas Vacation" of Phineas and Ferb, and again during the song "Winter Vacation".

The yeti makes an appearance as a major antagonist in the reboot Mickey Mouse cartoon, in the episode "Yodelburg". In it, Mickey is trying to get to Minnie's house but needs to do so quietly as the snow is ready to fall in an avalanche. Mickey is on his way up when he is confronted by the yeti, who roars at him. Mickey informs him of the danger, and the yeti acknowledges him. They then decide to continue, but quietly. The yeti attacks and Mickey runs, and the yeti chases after him. Mickey gives the yeti the slip and begins skiing down the hill, but the yeti follows, snowboarding on a tree. When the yeti sees mickey in danger, he laughs, and Mickey has to remind him to be quiet. Mickey avoids the danger, but the yeti hits it and falls off of the cliff, quietly screaming as he falls. He recovers at the bottom just as the inevitable avalanche breaks out, covering him in snow.

The yeti is a dangerous, wrathful, aggressive, obstreperous, and violent creature that seriously hates humans and wants to kill/get rid of any that come near. Though prior to 2015, the yeti attacked for no reason except misanthropy and rage, it was later revealed that the yeti is territorial and protective of its environment and does not want humans destroying or messing with it. However, it goes to great lengths, even homicidal ones, to try and force the people away from the mountain it believes is its. 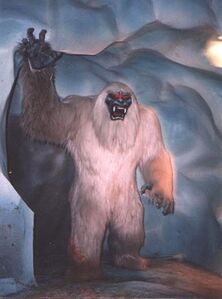 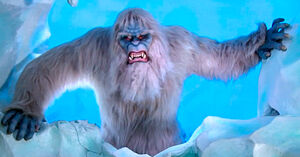 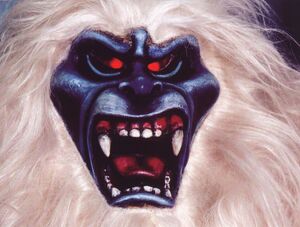 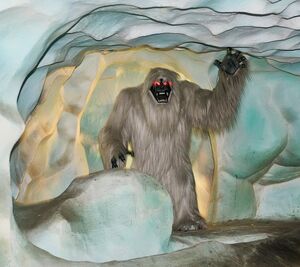 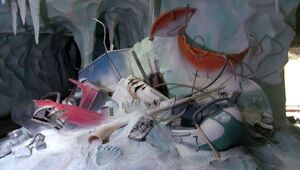 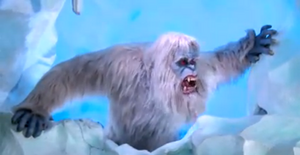 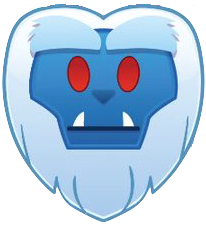 The yeti in Disney Emoji Blitz. 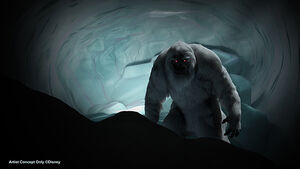 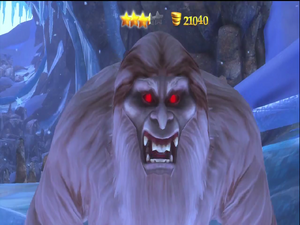 The yeti in Kinect Disneyland Adventures. 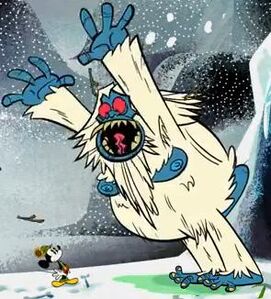 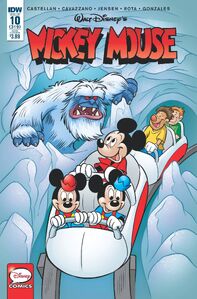 The yeti on the cover of a Mickey Mouse comic book. 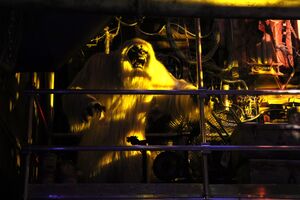 The yeti's cameo in Guardians of the Galaxy – Mission: BREAKOUT!. 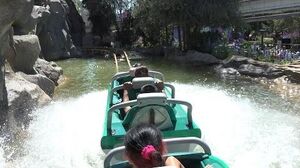 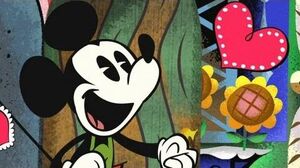 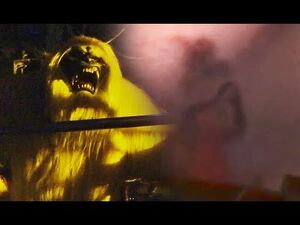