Yeti: Curse of the Snow Demon

Kill the Survivors of the Plane Crash (partially succeeded, but then failed).

The Yeti is the titular main antagonist of the 2008 made-for-television horror film Yeti: Curse of the Snow Demon. It was much more aggressive than the cryptid of the same name and was both predatory and scavenging in nature: eating both living prey and dead bodies - it was depicted as a large shaggy white-furred humanoid with sharp fangs and claws and an inhuman strength allowing it to leap great distances.

He was portrayed by Taras Kostyuk.

When an airplane crashed into the mountains, the handful of survivors had to fight not only their own moral dilemmas (such as the prospect of cannibalism) but the Yeti, who was attracted towards the supply of dead bodies the crash had provided and began dragging them away in the night.

The Yeti would also murder anyone that it came across in cold blood, often in extremely brutal ways; it was seemingly fueled on animalistic rage rather than any sort of sadism or malice (unlike many horror villains).

The Yeti was immensely powerful and could seemingly regenerate from fatal injuries as it went on a rampage throughout the movie - being shot, impaled, set on fire and even tossed off the side of a mountain (simply to return as enraged as before).

However, some of the Yeti's seemingly miraculous death-defying abilities were explained partly near the end of the film were it was revealed that there were at least two Yetis, suggesting there could be an entire race of these beasts lurking in the unknown (or at least a potential breeding pair). 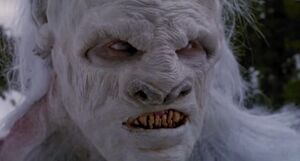 Retrieved from "https://villains.fandom.com/wiki/Yeti_(Yeti:_Curse_of_the_Snow_Demon)?oldid=4148386"
Community content is available under CC-BY-SA unless otherwise noted.