The Caller of the Black

One of the Outer Gods

Rule the universe alongside the Outer Gods.

Yibb-Tstll is an obscure entity who is one of the Outer Gods from the works of H.P. Lovecraft and has not enjoyed the same level of popularity as her brethren (Yog-Sothoth and Azathoth).

However, despite the relative obscurity of the beast, Yibb-Tstll enjoys a considerable amount of power and is said to be able to see all things in the universe at all time, and even to see through time and space, making it so wise that only the omnipotent Yog-Sothoth can surpass it in terms of wisdom. Yibb-Tstll is even once called "The Patient One".

Yibb-Tstll's blood is alien and can be utilized as a weapon known as "The Black", which takes the form of black snowflakes that stick to a victim and smothers them.

Often envisioned as an immobile dark mass of tentacles with a deformed head, detached eyes and large bat wings under which countless Nightgaunts suckle from innumerable breasts (heavily implying this monstrosity is either female or (more likely) a hermaphrodite).

Like many Lovecraftian horrors including her fellow Outer Gods, the mere sight of this creature can drive humans insane and even thinking too hard on the monstrous being is said to attract its malevolent intent. 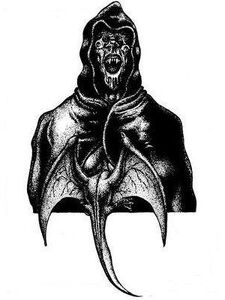 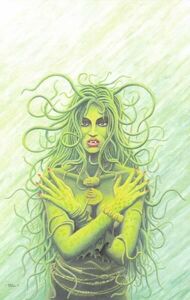 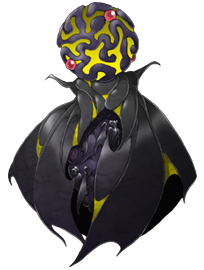 The Patient One aka Yibb-Tstll.