Knitting enemies with the Magic Yarn.

Although an unusual creature, Yin-Yarn is nevertheless incredibly powerful and split the realm of Patch Land into seven parts while also causing chaos in both Patch Land and Dream Land via transforming people into yarn and creating many yarn monsters in order to prevent Kirby from undoing his evil alterations of reality.

Yin-Yarn sought to conquer Patch Land and Dream Land, wasting no time in manipulating and abusing others in order to do so. He was also a powerful sorcerer, which was how he was able to achieve so much chaos to begin with.

The game introduces Dream Land as being peaceful. However, the narrator mentions rumors about a "caped sorcerer" turning the people of Dream Land into yarn. One day, Kirby was walking until he spots a Metamato atop of bush, where Yin-Yarn was hiding. When Kirby was attempting to eat the Metamato by his suction power, Yin-Yarn appears and tried to introduce himself to Kirby. But, Kirby continued to use his suction powers as he successfully eats the Metamato. Once it was done, a sock Yin-Yarn carried drags Kirby to Patch Land, which he turns into yarn.

Kirby rescues Prince Fluff from one of many enemies Yin-Yarn created. Prince Fluff introduces himself and explains Yin-Yarn's actions. Yin-Yarn ripped Patch Land into seven pieces and stole the magic yarn that kept Patch Land together.

After Patch Land has been stitched up altogether, Meta Knight explains to Kirby and Prince Fluff that Yin-Yarn had successfully taken control of Dream Land. That upsets Kirby and has no idea how to get back to Dream Land. However, Prince Fluff has the second half of the same sock Yin-Yarn possesses.

Both Kirby and Prince Fluff battle Yin-Yarn in two phases. With Yin-Yarn defeated for good and his sewing needles gone, the spell that was cast on Dream Land was undone. Every single strand of yarn disappears and Dream Land was reverted back to normal.

Yin-Yarn is defeated for the first time. Kirby and Prince Fluff celebrate too early and the knitting needles Yin-Yarn possessed grow and re-knit him back together but in a different form, as Mega Yin-Yarn. In a different form, both Kirby and Prince Fluff were rendered helpless until Meta Knight brings a metamortex, transforming both into a tankbot.

Upon defeat, Mecha Yin-Yarn falls apart, defeated for good, and the knitting needles shrink to their normal size. They run away, but they did not get far when they get exhausted. Both Kirby and Prince Fluff surround them and send them flying. 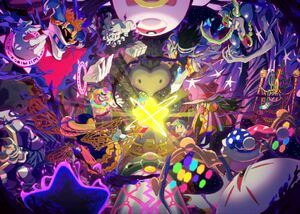 All final bosses from previous games, with Yin-Yarn on the right.