God of Time and Space

Gate Watcher
One of the Outer Gods

Expand his influence and enter the dimensions.

Rule the universe alongside the Outer Gods.

Yog-Sothoth is the secondary antagonist of the Cthulhu Mythos of the late dark fantasy writer H. P. Lovecraft. He has appeared in a various number of Lovecraft's stories, but was first mentioned in the 1943 horror novel The Case of Charles Dexter Ward, and has gone on to appear in more of his stories, serving as the unseen overarching antagonist of The Dunwich Horror and At the Mountains of Madness, and a somewhat benevolent character in Beyond the Gates of the Silver Key.

He is an unfathomably powerful deity and one of the most powerful of the Outer Gods, a race of ancient deities who wield great power, size and intelligence, equal and possibly even superior to Azathoth himself, as well as the largest and most intelligent—dwarfing the famous Cthulhu in the same scale that Cthulhu dwarfs humanity, and is a truly cosmic menace that is beyond mortal comprehension. Yog-Sothoth is the embodiment of all of time and space across an essentially infinite number of space-time continuums. For all intents and purpose, he is connected to the multiverse. He is the grandfather of Cthulhu and the grandson of Azathoth.

Yog-Sothoth is not only an all-knowing, all-seeing, and (supposedly) all-powerful being, but he also, like the fellow Outer God Nyarlathotep, has displayed to possess numerous avatars, such as the Lurker at the Threshold, and has served as the Godly father of Wilbur Whateley and the Dunwich Horror, and the spouse of Shub-Niggurath. He was born from the Nameless Mist, one of the three offspring of Azathoth alongside the Darkness and Nyarlathotep.

According to the mythology of Lovecraft and the Cthulhu Mythos, Yog-Sothoth is a limitless cosmic horror who is connected with all of space and time, yet is locked away from mainstream reality. The monstrous deity sees all and knows all, and can impart knowledge to anyone foolish enough to seek his favor, which often required human sacrifice (or worse) and would ultimately bring calamity and ruin to the would-be-follower.

Like many Lovecraftian deities, Yog-Sothoth has a number of avatars and even followers (such as the Chorazos Cult) by which to expand his influence. Although he is classed as "evil", he is technically an amoral character who is simply beyond our understanding of petty morality or sanity. (Indeed, Lovecraft wrote in a very dark fashion that swayed away from moral absolutes, and saw the universe as being cold and cruel by Yog-Sothoth's very nature.)

Like many Lovecraftian gods, Yog-Sothoth is thoroughly indescribable and unconcievable, way beyond human comprehension, and those in his presence can only perceive an approximation. He was described in many different ways throughout the various stories of the mythos, by various authors. However, there seems to be a common agreement that Yog-Sothoth visually manifests as a mass of glowing orbs that continuously merge, regrow and break apart, with eyes or tendrils in some versions. In At the Mountains of Madness, he is portrayed as a huge mass of yellow tendrils and in Beyond the Gates of the Silver Key, he is shown as a large creature with eyes and tendrils. Whatever the case, Yog-Sothoth is among the most eldritch and incomprehensible of even Lovecraftian deities; far surpassing any and all of the Great Old Ones and even other Outer Gods, only matched in sheer power by fellow supreme Outer Gods like Azathoth.

2nd only to Azathoth, Yog-Sothoth possesses Nigh-Omnipotence, omniscience, and omnipresence, and is the guardian of the gate, and if Azathoth is awakened he is erased has well with it.

Yog-Sothoth's name was first mentioned in Lovecraft's novella The Case of Charles Dexter Ward (written 1927, first published 1941). He goes on to be the driving force of the short story The Dunwich Horror, in which he fathers twin children with a human. He later appeared in At the Mountains of Madness in connection to the thing beyond the mountains that even the Elder Things fear.

Yog-Sothoth is coterminous with all time and space yet is supposedly locked outside of the universe we inhabit. Its cosmic nature is hinted at in a passage from Through the Gates of the Silver Key (1934) by Lovecraft and E. Hoffmann Price.

Yog-Sothoth knows all and sees all. To "please" this deity could bring knowledge of many things. However, like most beings in the mythos, to see it or learn too much about it is to court disaster. Some authors state that the favor of the god requires a human sacrifice or eternal servitude.

According to the genealogy Lovecraft devised for his characters (later published as "Letter 617" in Selected Letters), Yog-Sothoth is the offspring of the Nameless Mists, which were born of the deity Azathoth. Yog-Sothoth mated with Shub-Niggurath to produce the twin deities Nug and Yeb, while Nug sired Cthulhu through parthenogenesis. In Lovecraft's short story The Dunwich Horror, Yog-Sothoth impregnates a mortal woman, Lavinia Whateley, who then gives birth to twin sons: the humanoid Wilbur Whateley, and his more monstrous unnamed brother.

At the end of Lovecraft's late story The Haunter of the Dark, the protagonist Robert Blake calls on Yog-Sothoth to save him from the eponymous malign entity which he has let loose.

Beyond the Gates of the Silver Key

In this story, Charles Randolph Carter actually meets him, The Gate, the Key, and the Guardian. The encounter makes it very clear that it is the point of view which defines the nature of the interaction; there is nothing inherently evil or frightening about him. He opens the gates of the Multiverse to anyone who is willing to glimpse it and unlike the "nameless devourers" he is not going to harm you or force you into what you do not want. He gives Carter the option of leaving or going forward; The price is to see the true or at least partial vastness of what is, a flood of knowledge that overwhelms the current "self". Once Carter is at the nexus of all he is, was and will be, he is distilled into one being: a Wizard in a planet engaged in a battle; yet all Carter wants is to go back to Earth. How limited are we truly, and what does it take to move on beyond?

William Dyer​ and Danforth, after escaping a Shoggoth, leave the Mountains on their plane. Danforth looks back and sees something that causes him to go insane. He refuses to tell anyone (even Dyer) what he saw, though it is implied that it has something to do with what lies beyond the larger mountain range that even the Old Ones feared. It is theorised that this entity was an avatar of Yog-Sothoth (although the Colour Out of Space is referenced by Danforth during his rantings, suggesting that may have been responsible).

Yog-Sothoth has some connection to the mysterious Old Ones mentioned in The Dunwich Horror (1929), but their nature, their number, and their connection to Yog-Sothoth are unknown. Nonetheless, they are probably allied to him in some way, since during the story, Old Whateley gives up his own daughter, Lavinia, and sacrifices her to Yog-Sothoth, who impregnates her with two children: Wilbur Whateley and the Dunwich Horror. Wilbur Whateley, being the half-human son of Yog-Sothoth, tried to summon them so that they could control Wilbur's more tainted twin and make it reproduce, but a dog mauled him to his death. The Horror later begs for Yog-Sothoth to save it when defeated and is struck dead by a lightning bolt.

The Case of Charles Dexter Ward

In The Case of Charles Dexter Ward, his name is part of an incantation that could revive the dead (and with some of the syllables reversed, slay the creature raised):

The Haunter of the Dark

At the end of the story, the protagonist, Robert Blake, calls on Yog-Sothoth to save him from the eponymous malign entity which he has let loose.

Aforgomon is an obscure avatar of Yog-Sothoth invented by Clark Ashton Smith. He was revered by many cultures past, present, and future as the God of Time because of his preternatural ability to manipulate time and space. Little is known of this being's appearance because he only reveals himself to those who have angered him. However, it is known that he is accompanied by a blinding light. He is the mortal enemy of Xexanoth.

The Lurker at the Threshold

This is the name given to Yog-Sothoth in August Derleth and H. P. Lovecraft's novel The Lurker at the Threshold. In the story, Alijah Billington describes Yog-Sothoth's appearance as...

'Umr at-Tawil (Arabic عمر الطويل) The [Most Ancient and] Prolonged of Life), also spelled Tawil At-U'mr or Tawil-at'Umr, is described as an avatar of Yog-Sothoth in the story Through the Gates of the Silver Key, by Lovecraft and E. Hoffman Price. In the story, he presides over the timeless halls beyond the Gate of the Silver Key and the strange, near-omnipotent Ancient Ones that dwell there. He is described as the silhouette of a man behind a strange, shimmering veil. He is one of very few apparently benign Lovecraftian Great Old Ones who does not cause insanity in those who view him.

The Eater of Souls

In The Illuminatus! Trilogy by Robert Anton Wilson and Robert Shea, Yog-Sothoth is the Eater of Souls.

This identification is carried forward in Grant Morrison's Zenith series for 2000 A.D., and in Charles Stross' novelette A Colder War where the entity if summoned is able to instantly consume the minds of entire planets: 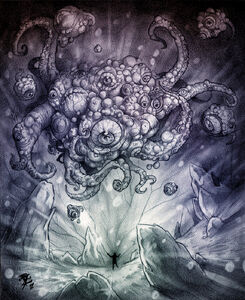 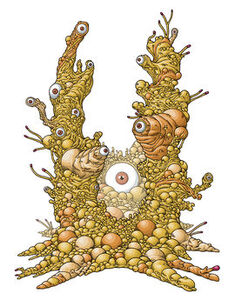 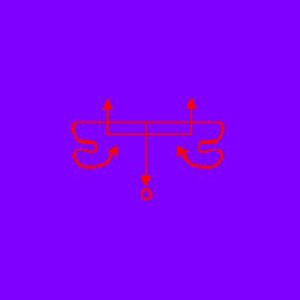 The symbolic seal of Yog-Sothoth becomes the very emblem of a group of his worshippers known only as the Chorazos Cult. 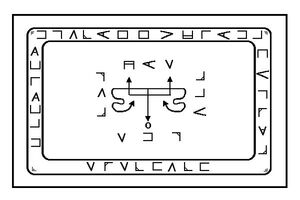 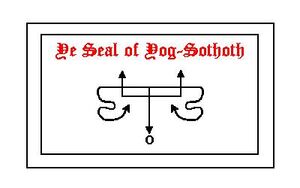 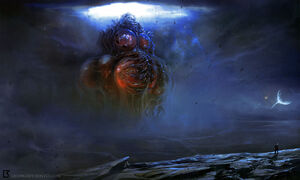 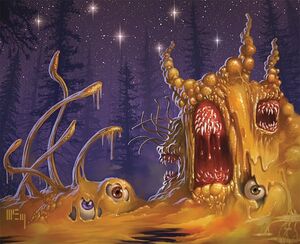 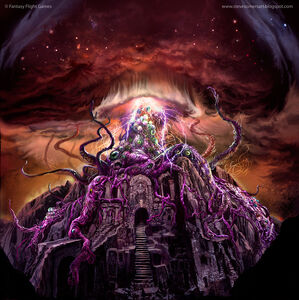 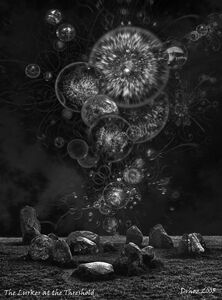 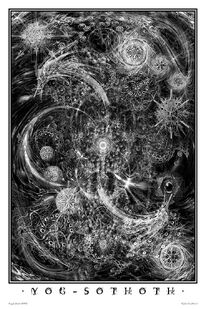 Yog Sothoth as it appears in Russell's Guide. 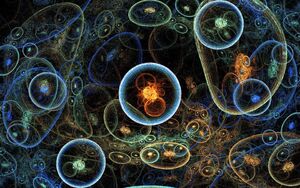 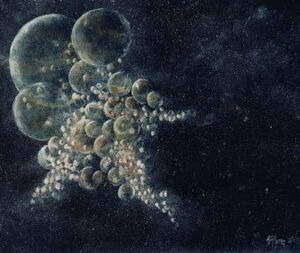