Crime Minister Yogoshimacritein is the main antagonist of Engine Sentai Go-Onger. He is a high-ranking member of the Banki Clan Gaiark and the father of Yogostein, noted for being the cruelest of his race. He only appears in the final few episodes of Go-Onger, taking control of the Human World invasion force. He is the Go-Ongers' archenemy and their most powerful and dangerous enemy, and also the final threat of the Go-Onger series.

He was voiced by Kiyoyuki Yanada, who also previously voiced Yogostein and Tau Zant.

After losing the Infinite Wastebin to Kegalesia and Kitaneidas to keep him from using Justice Dissolution, killing them in the process, Yogoshimacriten makes his way to the Deus Haguruma Magear to power himself up until the primary Go-Ongers trap him in the Bikkurium chamber and destroy the Deus Haguruma Magear to get their friends back, causing the Gaial's Hellgaille Palace to collapse. However, Yogoshimacritein survives and attempts to destroy the city until he is halted by Hanto, Gunpei, and the Go-on Wings.

Once the primary Go-Ongers join the fray, Yogoshimacritein enlarges himself in a process called Third Industrial Revolution, fighting Engine-O G12 before being destroyed by his opponent's G12 Final Grand Prix attack.

Years later, Yogoshimacritein is revived as a member of the Black Cross Army and fights against Gokai Yellow, Gokai Blue, Gosei Black and Gosei Yellow before being defeated by their combined powers. He later gets resurrected again in the final battle by the Black Cross King along with Chirakasonne and Kireizky. He is destroyed by Engine-O, Dairen'Oh, and RV Robo.

Yogoshimacritein is later revived once again, this time as a member of Dai-Zangyack. When Dai-Shocker and Dai-Zangyack reveal their alliance and fight against the combined Super Sentai and Kamen Riders, he, alongside Bat Fangire, leads an army of Gaiark and Fangire against them. He is destroyed by a combined finisher attack from the Go-ongers and Kiva.

Yogoshimacritein is a relentless psychopath who is the opposite of his son. While both are serious compared to Kitaneidas and Kegalesia, his serious nature is played completely straight with no kind of comedy (Other than a verbal tic, yet that's only a minor one which doesn't detract given verbal tics at the end are part of Gaiark biology) in him. As for his son, he is implied to be an abusive parent to him, as he only comes to avenge Yogostein's failure instead of the guy himself and doesn't see him as anything else than a useless failure.

Another thing Yogoshimacritein doesn't have from Yogostein is his compassion. He seems to treat the other Pollution Ministers worst of all, as he often uses them as living shields whenever he feels like and to save his own skin. And his treatment of his other most loyal servants don't seem to be much better given his lack of feeling when they get killed. He ultimately cares only for himself (And possibly Batcheed, though it's never quite confirmed) and seeks to rule all Braneworlds with an iron fist. If that means he has to order some destroyed completely, so be it.

Due to his role as the Gaiark Crime Minister and the (temporary) leader of the Gaiark, Yogoshimacritein posssesses numerous supernatural powers and abilities. He is the most powerful and dangerous enemy the Go-Ongers have ever faced, surpassing in power the three Pollution Ministers, including his son Yogostein, Kitaneidas, Kegalesia and Hiramechimedes, as well all of his minions, such as Kireizky and Chirakasonne and all other soldiers and Banki monsters of the Gaiark. Here's the list of Yogoshimacritein's abilities: 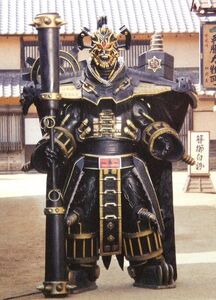