My Lord (by his lieutenants)

Control over his fleet and plotting.

The Yolkian Fleet Commander is an important asset of King Goobot's forces and the main antagonist of the Jimmy Neutron: Boy Genius computer game.

He was voiced by Rob Paulsen, who voiced Evil Jimmy Neutron.

The Fleet Commander plotted an invasion of a rebel base that is against Goobot's rule, even though his lieutenant got distracted by a sighting on Jimmy Neutron from Earth. He ordered his fleet around to go to Retroville and eventually steal Jimmy. Once they have captured Carl Wheezer, he gets angry at them and hires a new lieutenant.

Once again, they didn't find Jimmy but instead found Cindy Vortex, who gave some clues on where Jimmy is hiding. Once Jimmy Neutron arrived to request his friends to be freed from him, the Fleet Commander summoned his guards before they shrunk from Jimmy's shrink ray. He accepted the request but warned Jimmy that it will not be the last time they see each other before Jimmy and his friends depart from his vessel.

The Yolkian Fleet Commander is a devious ally of King Goobot, but unlike Goobot, he doesn't care about sacrifices. However, he gets upset when his soldiers fail him or do their job quickly. 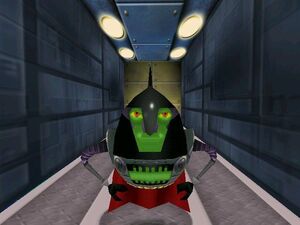 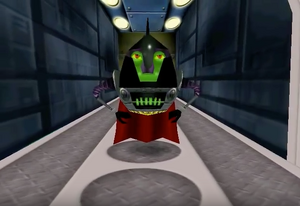