Yoko Minato is a member of Yggdrasill Corporation and a major antagonist in Kamen Rider Gaim. She uses the E.L.S. 03 Peach Energy Lockseed through the Genesis Driver to transform into Kamen Rider Marika.

She serves as a bodyguard to Ryoma Sengoku and is one of the Yggdrasill employees in on his inner circle planning to sabotage Yggdrasill efforts to combat the Helheim Forest invasion and use it to claim power for themselves. Later on, Yoko joins up with Kaito Kumon and becomes his right-hand woman when he becomes Lord Baron, assisting him in his plans to create a world where the strong do not oppress the weak.

She was portrayed by Minami Tsukui, who also previously portrayed Ashy in the Zyuden Sentai Kyoryuger film Gaburincho of Music.

Prior to the Inves Games and during the testing period to realize a functional Sengoku Driver, Yoko originally joined the Yggdrasill Corporation to spy on them and obtain their data, but was caught by Ryoma Sengoku. Rather than out her, Ryoma gave her the offer to defect and work under him as his assistant and bodyguard, which Yoko accepted.

Yoko also thought highly of Takatora Kureshima. However, to her confusion, Ryoma tells her to not forward the images of a higher-intellect Inves to Takatora, but to him directly instead.

When Gaim attempts to stop Ryoji Hase after his descent to an Inves, she along with the other Yggdrasill members transform. She spectates Sigurd as he kills Ryoji. Serving as a bodyguard for Ryoma Sengoku, she easily defeats Kouta and Kaito, both trying to escape and also take back their Drivers without Ryoma realizing. During Gaim and Baron's escape from Headquarters, under the guise of Marika, she stops Sigurd's fatal shot towards the two Armored Riders.

After Mitsuzane Kureshima became the company's newest member before his first task, Minato and Ryoma were told by Sid about Mitsuzane's inner darkness, and thus reveals to be true as Sid suspected. Yoko assists Mitsuzane, with the help of the Charmant owner, Oren and the former Beat Rider Jonouchi to retrieve the Sengoku Driver from Kouta by kidnapping his sister, Akira. The plan fails when Oren reveals that he would rather use a clean way of kidnapping Akira, which also sabotages Jonouchi on switching his Donguri Lockseed with a fake one when he's about to transform and torture Akira while posing as his patissier assistant. After Bravo is beaten by Gaim in Jimber Lemon Arms, she appears to fight him. As she manages to evenly match Gaim, Mitsuzane, who transformed into Ryugen shoots Marika and telling her that he will protect Kouta.

Yoko and numerous Kurokage Troopers defend a Crack from Rampant Inves. However, when Gaim also joins the fight to protect Zawame City from burning to ashes, he takes the opportunity to steal Yoko's Lockseed. Yoko, powerless, watches Kouta run off to Headquarters as he is determined to stop Yggdrasill.

As Ryoma decides to kick Kaito off their team after analyzing the Over Lords' data, Yoko asked him to give Kaito one more chance. Surprised at her request, Ryoma decides to give him one more chance as he gives Yoko a Genesis Driver and the Lemon Energy Lockseed. Mitsuzane enters Ryoma's office as he didn't told Takatora about the Over Lords yet. He also told them that they could find the Overlords easily if they follow his plan. Later, Yoko delivers the Genesis Driver to Kaito before she leaves. In the Helheim Forest, Yoko gave the location of the Overlords to Kaito and later as Marika, she attacks Gaim, but Ryugen blocks it as she continues fighting Gaim, following Mitsuzane's plan. Overpowered by Gaim, the Armored Rider leaves as Mitsuzane was surprised that Yoko was easily defeated. Later, an alarm is triggered, Yoko, along with Sid enters Ryoma's office as they suspect that the Over Lords made their move. As Takatora learns about the Overlords from Kouta, Yoko, Sid, and Ryoma begin their betrayal and leaves Takatora to die in the forest unprotected. However, Sid back-stabs Ryoma and Yoko as he destroys the equipment that keeps the Crack open and leaves as it starts to close. As the Over Lord Demushu enters Zawame, Ryoma ordered Yoko to capture the Over Lord. However knowing the Kouta was there, he then ordered her and the Kurokage Troopers to eliminate him. Marika arrive just in time to stop Gaim from finishing off the Over Lord as the monster mercilessly attacks them as a result having Kouta to be unconscious. Before she could eliminate Kouta, Baron stops her and retreats as he told her that Kouta could help them. As the Kurokage Troopers were badly beaten by Demushu, Marika called Ryoma that they should retreat, however he still wants to capture the Over Lord for the Forbidden Fruit. Seeing that Ryoma has become obsessed about the Forbidden Fruit, Zack and Kaito appears to aid them.

She is one of the four Riders (along with Kaito, Kaoru Kino/Kamen Rider Another Agito and Kiriya Kujo/Kamen Rider Lazer) revived by Kuroto Dan/Kamen Rider Genm (who disguised himself as Kazuma Kenzaki/Kamen Rider Blade) for his resurrection in his impossible "Game" by gathering their despair scent of their failures. At first, she, Baron and Another Agito sees Emu Hojo/Kamen Rider Ex-Aid as an enemy, until Ex-Aid's sworn ally, Lazer stops this misunderstadings, and helps the revived heroes and Ex-Aid to clear the game and get out of the Game World, but no avail. Until the real Kenzaki arrived and wins the Kuroto's impossible "game" immediately, foiling Kuroto's revival and lectures him about the fatal mistake for using Kenzaki's power, which contains the true power of the Undeads and the occurance of the Battle Fight when the same presences is used cause another Undead attract each other, because Kenzaki is no longer a human but now an Undead Joker, and if Joker Undead is the only Undead to be unseal on a certain world will cause doomsday of entire existence. She is later given by Ex-Aid a Kamen Sentai Gorider card to transform as Momorider. When Genm attempt to use his last ditch by initiating the self-destruct and attempt drag Ex-Aid and Blade along with him, Lazer, Another Agito, Baron and Marika sacrificed their lifes for their second deaths, with Blade and Ex-Aid escaped from Kuroto's now destroyed Game World. During a suicide attempt with her three fellow deceased Riders, Marika finally understand Baron's fate from his previous final fated battle against Gaim, whether in afterlife or being revived, Baron still keep fighting to survive.

Yoko's a quiet soul, but she has a tendency to use excessive force, as seen by beating Kaito down when he loudly got up in a rage during his talk with Ryoma Sengoku, with Kouta soon joining him.

She also seems to be loyal to Sengoku, though it's been hinted that it's a facade. She has some kind of personal interest in Kaito, which Ryoma notes as strange, as she usually doesn't involve herself with others.

This form is briefly seen during Marika's transformation sequence, before the armor attaches. However, this form is completely vulnerable to any incoming attacks when shot at directly in the suit, rather than at the Arms that is descending down on the Rider.

Peach Energy Armsis Marika's default peach-based armored Arabian Soldier form. Accessed through the Peach Energy Lockseed, this form's Arms Weapon is the Sonic Arrow, while the helmet Marika wears is the Momo Headpiece with the Steering Eye visor. This form debuts in episode 14. 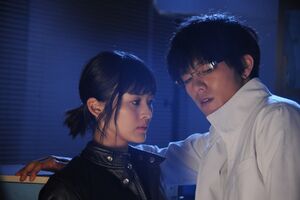 Yoko meeting Ryoma Sengoku in the past. 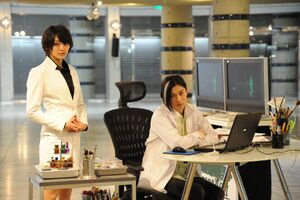 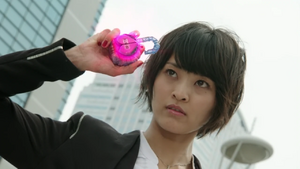 Yoko about to transform into Kamen Rider Marika. 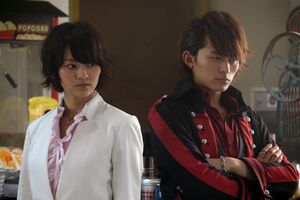 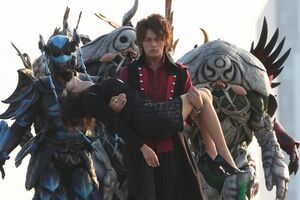 Kaito carrying a deceased Yoko's body.
Add a photo to this gallery 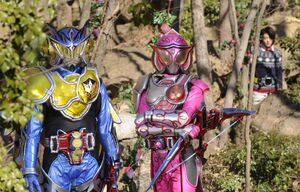 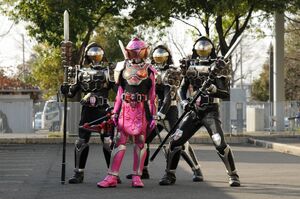 Yoko with a group of Kurokage Troopers. 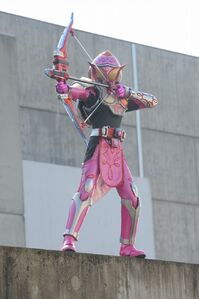 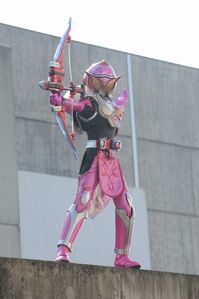 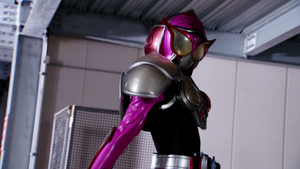 Retrieved from "https://villains.fandom.com/wiki/Yoko_Minato?oldid=4345949"
Community content is available under CC-BY-SA unless otherwise noted.