NOTE: This article is about the incarnation of Yon-Rogg from the Marvel Cinematic film series. The mainstream version can be found here: Colonel Yon-Rogg.

Leader of the Starforce

Wipe out the Skrull race.

Kill Vers for the Supreme Intelligence (both failed).

Yon-Rogg is the main antagonist of the 2019 Marvel film Captain Marvel and is set to return in its 2023 sequel The Marvels.

He is the leader of the Kree team Starforce who serves the Supreme Intelligence, and is also the former mentor turned archenemy of Carol Danvers.

He was portrayed by Jude Law, who also played Pitch Black in Rise of the Guardians, Harlen Maguire in Road to Perdition, King Vortigern in King Arthur: Legend of the Sword, Billy Hanson in Midnight in the Garden of Good and Evil and a version of Tony Shepard in The Imaginarium of Doctor Parnassus.

Yon-Rogg is the commanding leader of Starforce tasked to support the Kree Empire in their war against the Skrulls by all means necessary. Upon learning in 1989 that Kree defector Mar-Vell has created the Light-Speed Engine to peacefully put an end to the war, the Supreme Intelligence sent over Yon-Rogg and Minn-Erva to dispose of Mar-Vell and steal the energy core. Though Yon-Rogg succeeded in killing Mar-Vell, the energy ends up being absorbed into a young pilot named Carol Danvers when she destroyed the engine. The explosion is what caused the energy to be absorbed into Carol's body, erasing her memories. Upon learning of this, Yon-Rogg took Carol as his new protege to the Kree homeworld Hala, renaming her as Vers and training her as a weapon for the Kree Empire to use.

Tracking Down the Skrulls

In 1995, Starforce was tasked to help track down the Skrulls (led by Talos) and exterminate them due to their refusal to submit to Kree rule. Upon hearing that the Skrulls has kidnapped Kree spy Soh-Larr in the planet Torfa, Yon-Rogg led Starforce into tracking down the Skrulls there. However, it turns out that it was all a trap to lure Vers into the Skrulls' grasp as they intend to access her memories, just as Vers manages to free herself before engaging into a fight against several Skrulls. This actions is what caused the Skrulls' ship to self-destruct, forcing Vers, Talos and a number of Skrulls to evacuate to Earth.

Upon receiving a call from Vers over her current location on Earth, Yon-Rogg intends to rescue her so he leads Starforce to a 22-hour hyperjump to Earth. However, Vers soon regained her memories and learned that the Skrulls lost their homeworld to the Kree because their refusal to submit to Kree rule and that they just want to find a new homeworld to be safe from the Kree Empire. Vers also learned that before Mar-Vell died, she created a giant spaceship (powered by the Tesseract) that can be used to harbor Skrull refugees.

She also remembered that she witnessed Mar-Vell being killed by Yon-Rogg before she destroyed the engine that erased her memories in the first place.

As Yon-Rogg finally made to Earth, he tracked down Vers' location in an old shaft, only to find out that Norex is impersonating Vers in order to allow the real Vers (along with Nick Fury, Maria Lambeau and Talos) to fly up to Mar-Vell's giant floating in Earth's orbit containing many Skrulls refuges (including Talos' wife and daughter). Realizing now that Vers has regained her memories and defected to the Skrulls, Yon-Rogg kills Norex before contacting Ronan the Accuser to send in a fleet of warships to Earth. He would later have Starforce to track down Mar-Vell's ship, where they captured Vers and the Skrulls.

Yon-Rogg then watches as Vers is being interrogated by the Superior Intelligence, who taunts her of her failure until Vers breaks free of the implant that was used to suppress her powers, allowing herself to free Fury, Maria and the Skrulls from captivity and have them evacuate back to Earth. Upon witnessing this, Yon-Rogg orders Minn-Erva to take down the refugees at once.

As Yon-Rogg attempts to board a ship to catch up with Minn-Erva, Vers (renaming herself as Captain Marvel) engages into a fight with him. Following Minn-Erva's death at the hands of Maria, Captain Marvel was able to take down Yon-Rogg before defeating Ronan's fleet by destroying their missiles, forcing Ronan and his remaining forces to flee.

Witnessing the retreat of Ronan and his remaining forces, Yon-Rogg is confronted by Captain Marvel, Yon-Rogg challenges Danvers to a one-on-one fight encouraging her to show her true strength, but she simply shrugged him off and defeated him with a single blast. Captain Marvel decides to spare Yon-Rogg and decides to send him back to Hala in his own ship. Yon-Rogg replied that he can't leave empty-handed, to which Captain Marvel assured that he won't by saying that he will deliver her message to the Supreme Intelligence that she will put an end to the war for good. Yon-Rogg reluctantly obliged as Captain Marvel fires up his ship, sending him back to Hala.

It is unknown what happened to Yon-Rogg afterwards, though it can be presumed that he would face a severe punishment by the Supreme Intelligence for failing on his mission in disgrace after delivering Captain Marvel's message.

Yon-Rogg is a loyal and true believer of the Kree Empire's ideology like his other companions. This is shown as he never questions the empire's trues intentions and murders Mar-Vell when he knew that she was helping Skrull refugees who were attempting to liberate themselves of the Empire's oppressive rules.

But unlike Ronan, he isn't a fanatic and he prefers to prevent the natives of the unconquered planets from being involved in the Kree conflicts if possible, because he did not want to let Ronan attack planet C-53 (The Earth in fact) until he determined that there were no other alternative. He also has a sense of camaraderie with the rest of the Starforce, he also took a special liking for Vers and really wanted to help her control her powers not only because of the plans of Supreme Intelligence. Nevertheless, he was still ready to fight Danvers upon learning that she had discovered the truth about his deception, despite the fact that he still kept his respect for his former teammate. 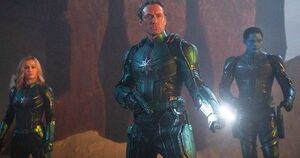 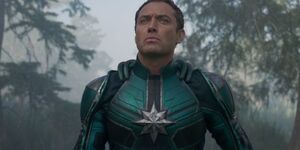 Yon-Rogg on the hunt for Captain Marvel. 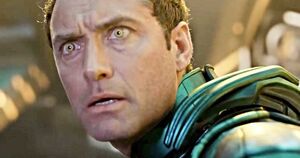