Villains Wiki
Register
Don't have an account?
Sign In
Advertisement
in: Guardians of the Galaxy Villains, Marvel Villains, Movie Villains,
and 58 more
English

Member of the Guardians of the Galaxy

Antagonizing Quill.
Removing people who get in his way.
Stealing.

Help the Guardians to defeat and stop Ronan the Accuser from taking over the universe (succeeded).
Find and obtain The Orb and to sell it in Xandar (failed).
Revenge on Quill for stealing the orb for himself and betraying the Ravagers (formerly, yet failed).
Join the Guardians and help them stop Ego from conquering the universe and to protect Quill (succeeded).

Yondu Udonta is a recurring character in the Marvel Cinematic Universe. He serves as a supporting anti-villain in Guardians of the Galaxy and as the deuteragonist of Guardians of the Galaxy Vol. 2. A variant of him also appears as the deuteragonist of "What If… T'Challa Were Star-Lord?", the second episode of the Marvel animated anthology series What If...?.

He is the adopted father of Peter Quill/Star-Lord, an exiled member of the Ravagers and was the leader of his own Ravager Clan before losing his position in a mutiny. He was originally hired by Ego, Peter's biological father, to retrieve him from Earth, but Yondu didn't deliver Peter upon learning of Ego's plans.

He was portrayed by Michael Rooker, who also played Henry in Henry: Portrait of a Serial Killer, The Bone Collector in the film of the same name, Grant Grant in Slither, Merle Dixon in The Walking Dead, Vikke in Lollipop Chainsaw, Lutador in Vivo and Savant in The Suicide Squad.

When Yondu was a child, his parents sold him out to Kree slavery until he was freed by the famous Ravager Stakar Ogord. Taking on Ogord's ways of the Ravager, Yondu became the leader of his own Ravager clan, becoming one of the most notorious criminals of the galaxy. He later made a deal with Ego, who hired him to collect his children from across the galaxy and bring them to him. Yondu did as instructed as the job made him rich, but he was unaware that Ego was killing the children until Ogord banished Yondu and his clan for their actions (as child trafficking was against the Ravager code). In 1988, Yondu was tasked to kidnap Ego's son Peter Quill from Earth. However, upon realizing Ego's true intents, Yondu decided to keep Peter and trained him to be a Ravager. Over the next 26 years, Yondu developed a close fondness of Quill, despite never showing any of his affection.

Yondu discovered that a mysterious item called the Orb was located on Morag; he was offered a great fee if he retrieved the item for Broker. However when Yondu arrived on Morag, he discovered Peter Quill had taken the Orb for himself.

Yondu was furious and phoned Quill who did not deny he had taken the Orb but refused to give his location before hanging up the call. Yondu issued a bounty for Quill's capture; when Yondu said he wanted Quill alive, this lead to an argument with one of his men and Yondu assured his men that once he had Quill, he would kill him himself.

Yondu and Kraglin Obfonteri traveled to Xandar to meet Broker. Yondu admired some of the strange artifacts that Broker had for sale. However, he made his true intentions known quickly when he drew his arrow and aimed it at Broker's head while mocking him. While Broker was scared for his life, Yondu forced him to reveal that the Collector was the person to whom he planned to sell the Orb.

Yondu and the Ravagers traveled to Knowhere and quickly found Quill, who was also being attacked by Ronan's Sakaaran mercenaries. Quill was able to briefly get away from Yondu by piloting a mining ship.

When Quill gave his location away to save Gamora, Yondu quickly abducted the two on his ship. Yondu initially planned to kill Quill because of his many betrayals. He aimed his arrow at Quill's throat and prepare to execute him, but when Quill convinced him that it was possible to steal from Ronan with the insider knowledge provided by Gamora, they decided to work together to get the Orb from Ronan the Accuser, on the condition that Yondu would get the Orb once they had succeeded.

During the Battle of Xandar, Yondu commanded his Ravagers to attack the Sakaaran ships; he and Peter Quill planned to enter the Dark Aster together but Yondu's M-ship was quickly shot down. He survived the crash and got out of his wrecked ship, only to discover several Sakaarans telling him to order his men to attack the Nova Corps ships. Instead on obeying, Yondu whistled and used his arrow to single-handed to kill every Sakaaran in front of him. He made it back to the city and later witnessed Ronan's death. Yondu convinced Quill to hand over the Orb as agreed; Quill agreed but managed to switch the Orb for a fake without Yondu noticing. As he left Xandar with Kraglin, they discussed how they did not deliver Quill to his father like they were hired to do, Yondu noted that he thought Quill's father, Ego was a jackass (foreshadowing Ego's true colors).

As the Ravagers drank and celebrated the victory over Ronan, Yondu decided to open the fake Orb given to him by Quill. He was amused to discover that Quill had replaced the Infinity Stone with a Troll doll.

Following the death of Ronan, Yondu is shown relaxing with his fellow Ravagers at the planet Contraxia, having been banished by Stakar Ogord for child trafficking, where Taserface questions of Yondu's softness towards Peter. Eventually, the arriving Sovereign High Priestess Ayesha met the Ravagers and offered them a reward for the capture of the Guardians of the Galaxy for the theft of the Anulax Batteries.

Yondu then led his Ravagers onto Berhert, where they manage to capture Rocket Raccoon and Groot as the other Guardians were being transported into the planet Ego. However, Rocket offered a deal to Yondu: he'll give him the batteries in exchange for his and Groot's safety, to which Yondu accepted by warning the other Ravagers that killing the Guardians would put the entire Ravager clan in trouble with the Nova Corps. Though several Ravagers agreed with Yondu and obliged to Rocket's deal, the greedy Taserface refused to tag along and initiated a mutiny against Yondu and his followers, right before Yondu and Rocket are knocked out by a freed Nebula.

With Taserface taking over as the new leader of the Ravagers, Yondu is forced to watch in shame as he, Rocket and Groot are humiliated. They are even more horrified to see Halfnut and Brahl killing off several Ravagers who remained loyal to Yondu by ejecting them into space (including Tullk and Oblo). Fortunately, a remorseful Kraglin sets Yondu and the others free, allowing Yondu to finish off Taserface and the mutineers in revenge for their treachery. Kraglin then activates an escape pod for himself, Yondu, Rocket, and Groot to head over to Ego's planet. During the trip, Yondu explains to Rocket that Ego is Peter's biological father who intends to use Peter's Celestial power to expand himself and take over the universe for himself, something which horrified Rocket.

When they are at Ego's planet and that Ego is starting to finalize his plot, Yondu helps the Guardians kill him off when during the battle. Following the destruction of Ego's planet, Yondu flies off with Peter into space, admitting that taking Peter under his wing was the best choice he made. To prove his point, Yondu sacrifices himself to save Peter's life by giving him a spare space suit, slowly suffocating to death, much to Peter's distraught. Acknowledging Yondu as his true father, Peter and the Guardians gave the deceased Yondu a Ravager funeral, which was later attended by other Ravager teams (contacted by Rocket) in honor for his actions.

As leader of the Ravagers, Yondu Udonta appears as a vindictive, calculating, and unscrupulous thief. He is willing to kill, threaten, and betray if his wellbeing is in danger or he desires something of value, sometimes reneging on his employers for a benefit such as turning Peter Quill into a Ravager when he was supposed to deliver him to his father. Though he claims that the Ravagers have a code of honor, as Quill states that code is virtually steal from everyone. It should be noted that Udonta may have some morality as he stopped the Ravagers from eating the young Quill - an act which he continued to throw in his face.

With Quill, Udonta has a complicated history. As numerous of his men state, he had always been soft on him and protected his well being - at times costing his credibility amongst the Ravagers but he was willing to use Quill as an example to his men, if not apologetically. Despite being a thief he has a level of trust in Quill but due to being betrayed beforehand, an equal level of mistrust. For example, taking his word in defending Xandar from Ronan the Accuser for the Infinity Stone but vowed to kill Quill and the Guardians of the Galaxy if they double-crossed him. When granted the orb containing the Stone, he did not seem particularly angered to find out that Quill gave him a fake Orb. Quill does state that Udonta is the only family he has.

Udonta also has a habit in which he collects oddities and places them on the console of his chair. The most recent one being a Troll Doll which was given to him by Quill in the place of the Infinity Stone.

Even with his flaws and manipulative attitudes, Yondu is an extremely charming and compassionate person and proved to be capable in an act of heroism. Despite being a notorious alien criminal, he has a level of humanity and a soft spot for Peter Quill, who he came to see as his own child. When he found a Troll Doll instead of the Infinity Stone inside the Orb, he laughed with joy and choose to forgive this deception instead of lashing out in anger. Also, while it appeared that he choose to adopt Peter as his own son rather than deliver him to Ego was driven by noble goal; horrified with the fate of Ego's other children and unwilling to have Quill get the same fate, Yondu choose to kept Peter away from his father to keep him safe. He also kept the Ravagers from attacking the Guardians when he was not given the Infinity Stone he was promised and cleverly kept his intentions hidden by saying the Nova Corps would be after them since their actions on Xandar had made the Guardians of the Galaxy allies to the Nova Corps. His most noble acts, which ultimately cemented his status as true father figure for Quill and hero, were sacrificed his own life to save Peter and even inspired him to stand up to his megalomaniac father. In his dying moments, Yondu told Peter while Ego was his biological father, he was not his "daddy" due to not caring for him as a person the way a good parent would. This act shows how much he loved Peter, and he sacrificed himself to ensure his survival. 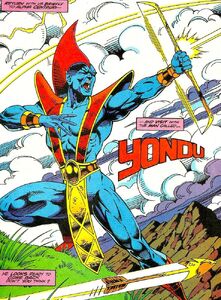 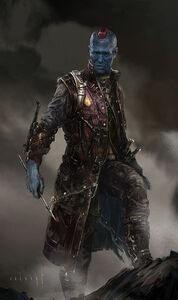 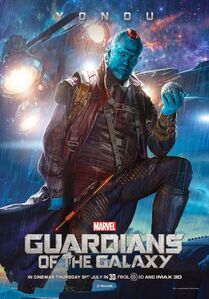 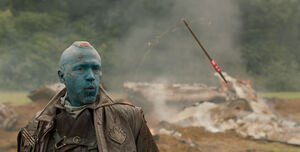 Yondu sacrificing himself to save Peter, much to the latter's distraught.

Yondu's Guardians of the Galaxy uniform in Marvel Future Fight. 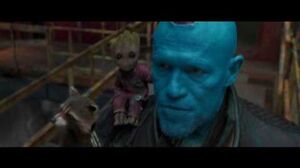 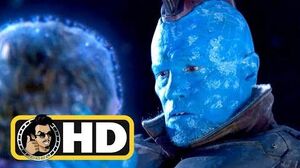