Gloating about his wealth.

Survive the zombie apocalypse under any circumstances .

Go to Busan to see his mother again (all failed).

Yong-suk is the main antagonist of the 2016 live action South Korean film Train to Busan, which is considered the first zombie apocalypse film made by South Korea.

He was portrayed by Kim Eui-sung.

Yong-suk is the rich chief operating officer of the company Stallion Express who is one of the many passengers aboard a train traveling from Seoul to Busan, when South Korea suddenly plunges into a zombie outbreak. Yong-suk proves to be very selfish and caring only about himself; as the film progresses, he makes the zombie apocalypse worse for the film's heroes and their friends to ensure his own survival.

Yong-suk first appears in the movie making fun of a shivering, dirty-clothed man for being homeless, bragging to Su-an how pathetic the homeless man is and that she could end up like that if she doesn't study, given he himself is a rich COO. Su-an calls him a bad person for saying that.

After the train stops at Daechon, the passengers including Yong-suk un-board but retreat back to the train when they see the railroad station has been invaded by zombified riot control men and ROK Army soldiers. Yong-suk locks the door to keep out the zombies, the film's protagonist Seok-woo and his friends, family and other alive passengers from being able to enter the train box where he is, then orders the train to leave already, making Jin-hee angrily protest her friends are still not on the train yet. Yong-suk shoves Jin-hee back and orders the train engineer Ki-chul to have the conductor take off. Fortunately, Jin-hee's friends do manage to get on the train in spite of Yong-suk. They text Jin-hee they got on the train, which delights her and she asks Yong-suk to unblock the doors, but Yong-suk only throws a tantrum that she doesn't even know if they're infected or not. Seok-woo, Sang-hwa and Yong-guk then fight their way past zombies and once they find that the door is locked, they start hitting it with bats, screaming for help and calling Jin-hee's phone, then it turns out that Ki-Chul has physically subdued Jin-hee and then Yong-suk smashes Jin-hee's phone. Once Seok-woo does break down the door, Yong-suk rushes to barricade the next (and last separating) door with full effort and wrestles to keep the door closed from letting Seok-woo and his friends and family enter. Fortunately, Yong-suk loses and the heroes are able to finally enter, then Seok-woo punches Yong-suk in the face for his selfishness. Yong-suk banishes all six of Seok-woo, his daughter Su-an, a homeless man, Sang-hwa's wife Seong-kyeong, Yong-guk and his girlfriend Jin-hee to the next train car as he mistakenly believed the spilled blood on Seok-woo's shirt meant Seok-woo is infected. An old lady then pulls open the door which lets in the zombie horde and kill off all the train passengers who weren't banished.

Yong-suk and Ki-chul have managed to quickly hide inside a bathroom, then they run out but with Yong-suk shoving Ki-chul into the zombies to save himself. Yong-suk then throws Jin-hee in front of a zombie and while Jin-hee's boyfriend is busy wrestling with the zombie, Yong-suk breaks through the glass window to run to the new, yet smaller train that the conductor turns on. He trips and is unable to get up until the conductor runs to save him, allowing Yong-suk to sacrifice his own rescuer into the zombies and board on the new train. Seok-woo, Su-an and Seong-kyeong manage to also get on the new train, but then they see that Yon-suk is infected and is now transforming into a zombie himself. Seok-woo tells him this, much to Yong-suk's horror who cries now he can't see his mother again. Yong-suk then dies and reanimates into a zombie, aiming to eat the three survivors. Seok-woo battles him and with help from Seong-kyeong, grabs Yong-suk, but while doing so, Yong-suk bites deep into Seok-woo's right hand until Seok-woo throws him off the train, killing him. Seok-woo then commits suicide by also throwing himself off the train due to the bite. 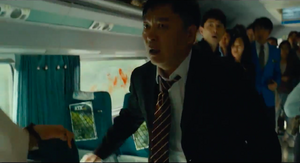 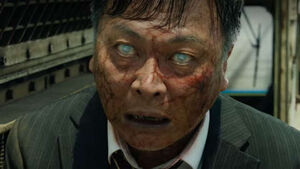