All of Us Are Dead

Yoon Gwi-nam is the main antagonist in the first season of the 2022 South Korean TV series All of Us Are Dead. He is a disgruntled student of Hyosun High who is the archenemy of Lee Cheong-san. After the zombie apocalypse, he gets infected and becomes a human-zombie hybrid.

He was portrayed by Yoo In-soo and voiced by Caleb Yen in the English dub.

Gwi-nam is a tall Korean man with short black hair, jeans, and a black shirt with a bloody white uniform underneath. After his first altercation with Cheong-san, he has a large cut in his eye as he wears a zipped up archer uniform.

In the webtoon, he has a bulky build and an angled jaw.

Gwi-nam before the outbreak was a sadistic bully who hurt, exploited, bullied and harassed those around him for fun. He was not the leader, however, and showed to respect and even had a friendship with Son Myeong-hwan, the leader of the clique, with some strong hints of insecurity. When the outbreak started, he instantly showed cowardice as he shoved four people to the zombies, one of them being the lunch lady who offered to help. His cowardice is short lived however, as he shows competence with killing zombies with very little hurt. His psychopathic tendency's also bloom here as he threatens the principles life, before tying him up and murdering him in cold blood.

He is careless of others lives, shoving people into zombies for no reason other than being in the way. When becoming a hybrid, his qualities became worse and he turned more sadistic, egotistical, blood thirsty and spoiled. His main goal is revenge, wanting to gauge Cheong-san's eye out due to the latter injuring his own eye.

His sadism is more outward, as shown such as taunting a dying Jung Min-jae as he turns into a zombie though he doesn’t completely eat him due to “respecting” his bravery. He even drops his only redeeming quality as he murders Myeong-hwan and feeds him to zombies. He does show some brief hints of remorse before his final fight with Cheong-san, crying after the latter calls him “nothing more than a monster” but he appears to shed this as he attacks and fights him, even sadistically gouging his eye in vengeance. At his core, Gwi-nam is revealed to be a spoiled brat, getting to a short tantrum when the students didn't recognize him.

He is even more evil in the webcomic, also showing no cowardice around stronger people. He glues the eyes of the teacher and sends her outside to let her become a zombie. Then he steals a bra from a senior female student and uses it as a knee pad. Worse, he sexually assaults a female classmate, and when he sees her menstrual blood, he acts like a zombie and devours her flesh.

Not much is known about Gwi-nam's early life, except that at some point last year, he crashed his father's car.

Yoon Gwi-nam was a notorious, traitorous, abusive bully at Hyosan High who used to pick on insecure highs schoolers to fit in with the other bullies. Him and his gang mostly targeted Jin-su, the son of Lee Byeong-chan, the science teacher. One day, they even went as far as putting him in a washing machine. Mr. Lee wanted the bullies punished for this and bought their behaviour to the school board, where Gwi-nam said the were "just joking around." Luckily for them, the principal dismissed their heinous acts as an attempt to maintain the school's image. Later, him and his gang bought Jin-su up to a roof to attack him. Jin-su is displaying odd behavior and tries to bite them, but ultimately the boy falls off the roof. Gwi-nam got one last look at him and cursed.

After this, he moved onto picking on Eun-ji and Cheol-soo, primarily. He bullied them both with his gang until Su-hyeok arrived who told the two victims to leave and grow up. However, Gwi-nam threatened Su-hyeok that he will post the embarrassing pic of Eun-ji right away if he lets Eun-ji and Cheol-soo stay, so Su-hyeok let them stay to avoid the risk and continue their shenanigans. Later, in class, Gwi-nam drew on the back of Eun-ji's shirt, causing the whole class to laugh.

When the "Jonas Virus" infection hit on the school, he hid in the lunch room and threw three people to the zombies before fighting his way out. He then made his way to the principal's room. Later on, the principal and Gwi-nam starts a rough argument that ends up with Gwi-nam killing the principal. Lee Cheong-san, who saw and recorded the whole thing, threats to tell the authorities about it, resulting in a chase to the library. Gwi-nam throws a kid named Do-min to the zombies before a fight breaks between him and Cheong-san. While the two are fighting in the library, Cheong-san gets the upper hand gouging Gwi-Nam's eye, and tossing him to a squad of zombies. Due to his determination to kill Cheong-san, Gwi-nam survived the attack and became a "half-bie", gaining advanced strength and other varies enhancements.

Gwi-nam then tries to kill Cheong-san for revenge, and while on his way to find him, he saves Su-hyeok from being eaten by a zombie by killing the zombie. With this chance, Gwi-nam asks Su-hyeok to tell him where Cheong-san is, but, due to the nature of him, Su-hyeok refuses to tell him anything. This leads to the two of them fighting, and while Nam-ra tries to help Su-hyeok, she was be bitten by Gwi-nam before Su-hyeok succeed to get rid of him by throwing him out the window. However, Gwi-nam survives his fall.

When he wake up, he tries once again to find Cheong-san. On his way, he finds Son Myeong-hwan, the bully leader, hiding under a truck. The latter will orders Gwi-nam to serves as a bait so that he could escape, which makes Gwi-nam angry. Gwi-nam takes Myeong-hwan by force and orders him to beg for his life before the zombies arrives near to eat him. When Myeong-hwan begs Gwi-nam to release him, the latter refuses and lets Myeong-hwan being eaten by the zombies after violently breaking his arm.

After finding out Cheong-san running towards the rooftop. He makes it to the stairway and proceed to fight against the group, and Nam-ra chucks him zombies, and the group makes it up to the roof. Gwi-nam start to punch the door, breaking his wrist before giving up and walking away.

When a remorseful Na-yeon starts collecting food to meet the group up at the rooftop, Gwi-nam ambushes her and proceed to kill her by eating her, before starting to climb the wall to ambush the group. The group and him proceed to fight, him being able to punch and break Joon-yeong’s glasses. When he struggles against Nam-ra, attempted to sway her into joining, in which she instantly throws him off the roof.

After going through pain the entire night due to the loud thunder, Gwi-nam reaches the rooftop again but the group is gone. He then comes across Min-jae. He initially decides to let him go but upon noticing Cheong-san’s smell on him, decides to bit and turn him. He’s impressed by Min-jae’s bravery and claims he won't eat him if he runs. Min-jae defiantly fights back and tires to kill Gwi-nam with arrows but ultimately turns although strangely Gwi-nam doesn’t eat him.

Upon following the group to a construction site, he tortured Cheong-san in front of his friends, biting a chunk of his arm. Cheong-san throws him down after the loud noises form the drones hurt his ears and distracts the other zombies, allowing his friends to escape.

Gwi-nam confronts him and briefly shows emotion after Cheong-san calls him a monster but then proceeds to fight and overpower Cheong-san, gouging his eye in revenge. He tells Cheong-san he will let him live if he runs away but then the military bombs the school to kill all the zombies. Cheong-san grabs Gwi-nam from behind and suplexes him down the shaft as the building explodes, although it’s ambiguous as to if he was saving him or using him as a shield against the flames in the process. As the two fall, the flames seemingly consume and kill them both.

However, when the surviving students return to the site, they don’t find either of their bodies and Nam-ra’s mentions of their being more kids like her indicates the two of them could still be alive. 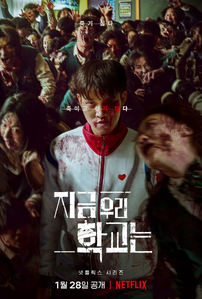 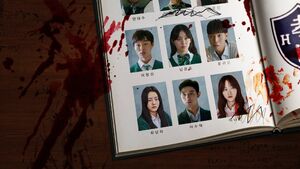 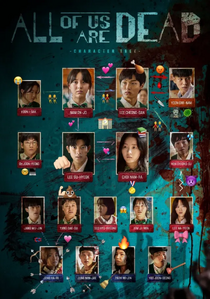 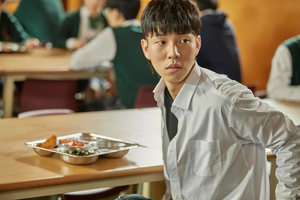 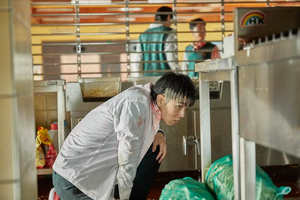 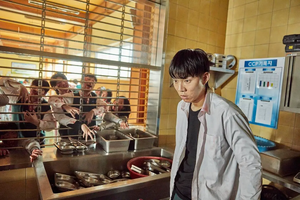 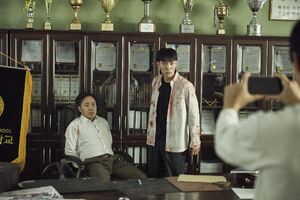 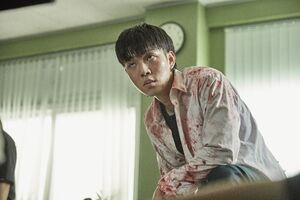 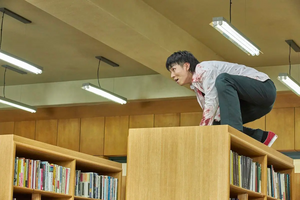 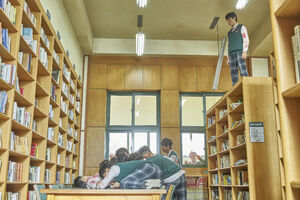 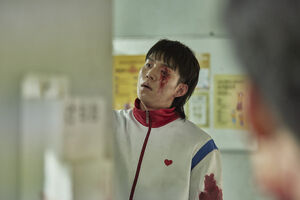 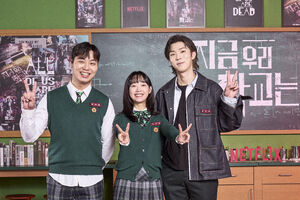 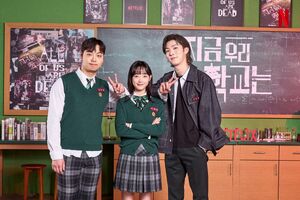 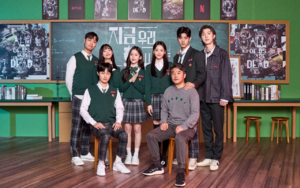 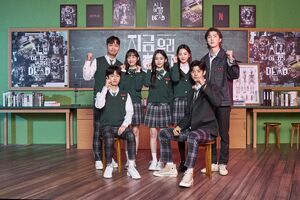