Yore is an extra boss from Dragon Quest IX. He is an imprisoned demon beneath Stornway Castle and the one responsible for the destruction of Brigadoom. He has a henchwoman named Morag.

After the main events of the game are concluded, the Hero aids a group of people calling themselves the Brigadoom Brigade in a mission to restore the ruined city of Brigadoom and retrieve information of what could have caused its fall. Princess Simona, with the aid of the ghost of Princess Mona, finds out that the former king of Stornway, who maintained a close relationship with the king of Brigadoom, sold it to Yore in exchange of protection from the Gittish Empire. Fearful of the demon, he imprisoned it inside a coffin. Upset at what had saw, Simona asked the hero to lead her to the coffin where the demon rested. When the princess gets there, she reveals in anger to the king, the hero/heroine and all the ones present that she wants her kingdom destroyed to compensate to the deceased princess Mona for what the former king had done. Her father, the king, tries to knock some sense into her. In the end she understands but Yore is still awoken and wishes for revenge. It's up to the Hero to defeat this powerful foe.

According to the Bestiary, this demon had already made a deal with the Gittish Empire to destroy Stornway as well, regardless of the outcome. 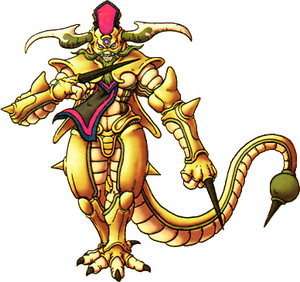 Yore
Add a photo to this gallery

Retrieved from "https://villains.fandom.com/wiki/Yore?oldid=4096659"
Community content is available under CC-BY-SA unless otherwise noted.