He was voiced by Taiki Matsuno who previously voiced Spell-Master Pierre, a Clock Org, Amoreian Baachiyo, Hades Beastman Garim the Gremlin, Rutsu, a Vacuum Banki, Sunasusuri, Jogon of the Ningyo, Debo Batissier and a Chair Shadow.

Yoshi Urazer's head is a blue cuckoo bird inside of a brown bird house, his shoulders are white eggs, his torso is white mummy like with a Gangler safe on the right,his blue skrit and cape has feathers on it and he is wearing brown boots.

Yoshi Urazer made his first appearance where he's being chased by a couple of Pordermen in the parking lot, but he was then saved by the police, but if you notice the door-like panel on his face well that contained his evil and he's only showing his child-like nature due to the treasures ability that's within his safe once the Pordermen are destroyed he asked the police to arrest him.

A while later he was at the police station where he was being questioned by the police. Keiichiro then used the lamp to forced Yoshi to tell them the intel about the Ganglers, but that failed not even a disguised Sakuya worked, so they have Jim and Commander Hilltop to cosplay each other to force Yoshi into spilling the beans, but that failed too. However when Tsukasa tries to be nice for Yoshi by giving him a new identity the treasures ability activates to keep his evil side in check.

Later that night Tsukasa gave Yoshi the good news about the plea after that he was thinking about staying with her at her apartment as her roommate then they had a meal once that was done he explained about Goche Ru Medou transplanting one of his two safe to a monster that she was working on which is an Experimental Body.

Due to the transfer to the HQ in Paris the police takes Yoshi to their destination by driving there however they were then ambushed by the arrival of the Pordermen. So Patren1gou and Patren2gou keeps the Pordermen busy while Tsukasa takes Yoshi to safety. However when Yoshi takes À l’envers (which translate as "Upside-down") police badge from his safe he revealed his evil wild side and attacks her, but thanks to Noel suspicion about this gangler he saved Tsukasa in the nick of time and he then battles Yoshi with some help from Patren1gou, Patren2gou and Patren3gou after that he was then destroyed by PatrenUgou. 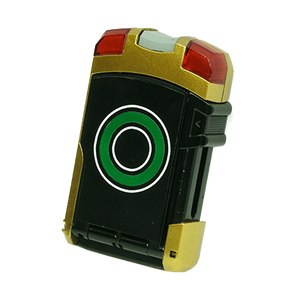 Retrieved from "https://villains.fandom.com/wiki/Yoshi_Urazer?oldid=3619930"
Community content is available under CC-BY-SA unless otherwise noted.